Thermite found in the dust from the World Trade Center

Thermite (explosive) has been found in the dust and steel debris0.

The claim stems from a video clip by the World Trade Center 2 shortly before the building collapses. Glowing material can be seen coming out of the building. This was quickly seen by conspiracy theorists led by physicist Steven Jones as a result of ignited thermite. It was claimed that the material was melted iron/steel. 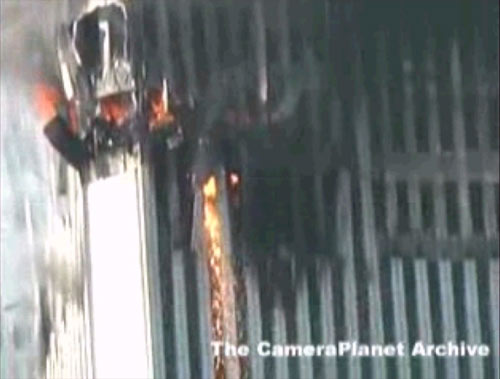 Since conspiracy theorists could not prove that the material was the result of a thermite reaction, and there was no indication anywhere that this was the case, they turned to the dust from the collapsing buildings.

Steven Jones collected four samples from various sites on Manhattan and announced in 2007 that he would have them tested independently. It is possible that a couple of independent tests were carried out, but in that case Jones has never made the results available to the public. Instead, he went on to test the samples himself together with the Danish retired chemistry professor Niels Harrit and others. This led to an article which was published in April 2009, in Bentham Open Journal, which is owned by Bentham Science Publishers, whose headquarters are in the United Arab Emirates. The title of the article was “Active Thermitic Material Discovered in Dust from the 9/11 World Trade Center Catastrophe”.

The article does not conclude the presence of either explosives or nanothermite. However, the article has been used by Jones, Harrit, and a long list of other conspiracy theorists to publically claim that enormous amounts of nanothermite were found. The article also points to the nanothermite being produced by the American military. Thus, the authors of the article claim that the terror attack on September 11, 2001, was an inside job.

There is no evidence of nanothermite or any type of explosives found in the dust from the World Trade Center 1, 2, or 7.

Investigation by the U.S. Geological Survey

Immediately after September 11, 2001, the authorities began investigating the impact of the terror attack. Along with the enormous rescue and cleanup work, a number of samples were taken from the ruins of the World Trade Center to among other things to investigate the dust after the collapses and destruction of all seven buildings. This was done by the U.S. Geological Survey, an independent scientific research bureau of the U.S. Department of the Interior1.

A number of trace elements of metal from the two steel samples that in all probability have other sources:

The results did not arouse suspicion of explosives.

In the article “Active Thermitic Material Discovered in Dust from the 9/11 World Trade Center Catastrophe”, it is clear that pseudoscientific methods are being used. One example from page 23:

1. How Much of the Energetic Red Material Survived During the WTC Destruction?

In the sample provided by collector J. MacKinlay the fraction of red/gray chips was roughly estimated. Fifteen small chips having a total mass of 1.74 mg were extracted from a 1.6 g sample of dust from which readily identifiable glass and concrete fragments had been removed by hand. Thus the fraction of red/gray chips was approximately 0.1% by weight in the separated dust. Another sampling showed 69 small red/gray chips in a 4.9 g sample of separated dust. Further samples are being analyzed to refine this estimate. The fall of the WTC Towers produced enormous clouds of dust whole metal mass is difficult to ascertain; but clearly the total mass of red/gray chips in the WTC dust must be substantial given the fraction observed in these samplings.0

A microscopic sample was taken from some dust, after which 99.9% was discarded in advance, and the result extrapolated to make up a “substantial” part of the combined mass of the ruins of the World Trade Center.

The same could be done after the Copenhagen Carnival had finished: Bend down, pick up four handfuls of garbage, remove paper, glass, and other dirt, find 15 microscoping pieces of something you claim is gold-like substances with a combined weight of 1,74 mg and conclude that the streets of Copenhagen is paved with pure gold.

Another example is the conclusion that the energy level in two of the four used samples far from reach the levels of conventional explosives such as TNT or HMX: 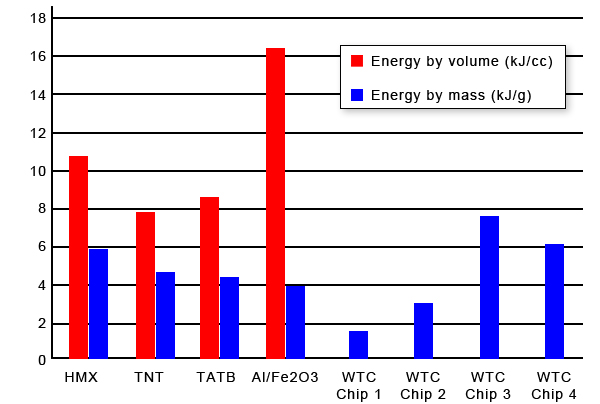 One of those samples is the very same sample (from MacKinlay) as in the above was claimed to be the scientific evidence of the presence of these red/grey pieces of nanothermite.

The result of the claimed presence of the nanothermite in the World Trade Center would be the melting of the steel. Steel melts at different temperatures depending on the alloys. In their investigation, NIST is calculating with a temperature of around 1,600 C. It turns out that MacKinlay’s sample has nowhere nearly enough energy to melt steel (which should be a result of the nanothermite): 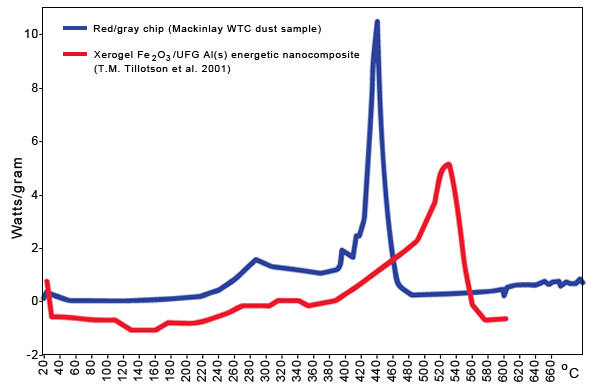 There are serious problems with the whole investigation:

Did Mark Basile repeat the experiment?

In October 2010, there were rumors that a chemistry engineer by the name of Mark Basile had repeated the experiement using dust samples from the World Trade Center and reached the same conclusion as Harrit, Jones et al.

Basile has yet to publish anything in written form and nothing points to it ever happening. Instead he has given interviews of which some can be found on YouTube:

There are additional serious problems with Basile’s experiment:

The standard is thus lowered considerably in the follow-up experiment by accepting the use of anonymous sources and by disregarding altogether the demand for publication in peer reviewed journals.

Despite this is Basile’s experiment considered scientifically in order by the conspiracy theorists, and they think that the claim of nanothermite being found in the dust from the World Trade Center has been scientifically confirmed.

This is quite insufficient and can in no way be regarded as a scientific result. One cannot merely tell about a scientific discovery without also publishing in a recognized scientific journal, but only do interviews conducted by primarily conspiracy theorist groups.

This approach is reminiscent of the infamous “cold fusion” case, where two scientists publicized a ground-breaking discovery, namely a method to recreate the physical processes that happen inside the Sun. This would have resulted in eliminating the energy consumption needs for the entire world in all eternity. The two scientists, Pons and Fleischmann, claimed that they had recreated the processes in an ordinary laboratory quite without the huge technological steps physicists elsewhere considered necessary. Pons and Fleischmann avoided publicizing their discovery in a recognized scientific journal, but instead, they chose to hold a press conference. It turned out later that their discovery was a hoax7.

It should also be mentioned that Mark Basile shortly after the terror attack on September 11, 2001, became convinced that the New World Order was behind the attack. Thus, he cannot be considered an unbiased source, along with Niels Harrit and Steven Jones.

The popular tv show “Mythbusters” which tests more of less crazy myths. One particular show, which first aired on November 12, 2008, (episode 113, “End with a bang”) investigated what happens when half a ton thermite is placed on top of a car. The aim was to cut the car in half.

It turned out that the reaction was so powerful that the thermite cut right down through the car instead of dividing it into halves.

The experiment should not be seen as the final evidence that thermite was not used in the World Trade Center 1, 2, and 7. It merely emphasizes how complicated the use of enormous amounts of thermite is. Even the 10-100 tons of nanothermite that Niels Harrit among others claim was used to blow up the three buildings could hardly be controlled to such a degree that it would instead look like a normal collapse.

The video clip shows that the smoke becomes very pervasive, and a very bright light is seen, neither of which could be hidden from view, if the World Trade Center 1, 2, and 7 had had this secret military experimental explosives placed on each floor.

What is dripping from the building?

A far more plausible explanation, given the temperatures in the building, is that aluminum mixed with soot and other things is dripping from the building in a melted form. Another explanation could be that it is the lead content from power supplies installed in that particular corner of the building.

There is no documentation that it is melted iron/steel.

Whatever it is, it can under no circumstances be pure steel. If it is steel, it would be mixed together with all nearby materials with a lower melting point. Thus, grainy YouTube videos cannot be used to determine the chemical composition based on color and density.

It is illogical that the New World Order should have placed nanothermite in the World Trade Center 1, 2, and 7:

Additionally, it is incoherent and unexplained how the nanothermite supposedly was ignited. It is often claimed that the planes colliding with the World Trade Center 1 and 2 could play a role, but this would only make it more incoherent: It took between 30 and 90 minutes from the planes exploding (and thus be able to ignite anything) to the collapse of the buildings. It also does not explain how the presumed nanothermite in the World Trade Center 7 was ignited, given that the building was not hit by a plane.

It is self-contradicting that the New World Order would use a secret military experimental explosive (nanothermite) for an attack on the World Trade Center in order to make it look like an attack from al Qaeda. The Islamic terror organization had already attacked the World Trade Center in 1993 using a simple fertilizer bomb. The only logical choice would be to use a similar method as the one used by the one you were trying to pin it on.

And finally, the claim of nanothermite contradicts one of Niels Harrit’s most often used arguments, namely that it is impossible that something happens for the first time. The argument is used about the World Trade Center 7, where Niels Harrit argues that it is the first time a steel-framed high rise collapses due to fire, so it cannot have happened that way. If the same argument is used with regards to the claim about nanothermite, it immediately eliminates nanothermite because it would have been the first time a building was blown up using that substance.