The media knew WTC 7 would collapse “How Did The BBC Know About WTC7’s Collapse 23 Minutes Before It Happened?”0

“How could the media report about WTC 7 before it collapsed?”1

The claim, in the form of a question, is used to argue that the World Trade Center 7 did not collapse as described in the official account, namely after seven hours of uncontrollable fires and destruction from debris from the World Trade Center 1. Instead, the building collapsed due to controlled demolition. Furthermore, the claim insinuates that there was a secret conspiracy behind the collapse, including the media.

Taken literally, the claim is true in the sense that it is correct that the media knew that the WTC 7 would collapse. The media knew this, because this was explained to the reporters located on Manhattan near Ground Zero by the firefighters, who had realized for a long time that the building could not be saved, and would collapse sooner or later due to the fires.

The firefighters and rescue workers chose, several hours before the WTC 7 collapsed, to focus their efforts on saving people in the area in the aftermath after the collapse of the Twin Towers. Due to this decision, the WTC 7 had been evacuated around noon, local time, and decided to abandon the building, in favor of concentrating the rescue effort on WTC 1 and 2, where people were known to have been. This was also urged by the fact that the water supply to the area, including the building’s sprinkler system, was destroyed by the collapse of the Twin Towers, rendering it impossible to fight the fires in WTC 7, fires that over time weakened the structural integrity.

It is correct that the BBC reporter Jane Standley stated that WTC 7 had collapsed, about 20 minutes before the actual collapse. This announcement turned out to be a common error, when news media report live from an unraveling event. The reporter receives a constant stream of information which, due to the pressure of the moment, will not always be fact-checked. It is unfortunate when it happens, and Jane Standley has also later commented on the error:

“Asked what she could tell viewers about the reported collapse of Building 7, Standley replied, “Well, only what you already know. Details are very, very sketchy.” She was thinking on her feet, she explained, having been confronted with a statement that she had no way of checking.”2

But Jane Standley was not at the time far from the only one who knew the building would collapse. Most firefighters present knew, and several had already spoken to the media, e.g., the firefighter Miller:

Likewise, Ashleigh Banfield, a reporter from MSNBC, said that WTC 7 was about to collapse:

Fire chief Daniel Nigro later gave an interview, where he also made it clear that he knew the building would collapse.

“The biggest decision we had to make on the first day was to clear the area and create a collapse zone around the severely damaged 7 World Trade Center, a 47-story building heavily involved in fire. A number of fire officers and companies assessed the damage to the building. The appraisals indicated that the building’s integrity was in serious doubt. I issued the orders to pull back the firefighters and define the collapse zone. It was a critical decision; we could not lose any more firefighters. It took a lot of time to pull everyone out, given the emotionalism of the day, communications difficulties, and the collapse terrain.”3

A tried-and-true rule of thumb about how the media works says, first comes the news, then comes the truth. Often, imprecise information will emerge at the start of an event, or the information is merely misunderstood, leaving the media to issue a correction at a later point. One of the classic examples happened in connection with the shipwreck of Titanic in 2912. The first reports were, unfortunately, way too optimistic: 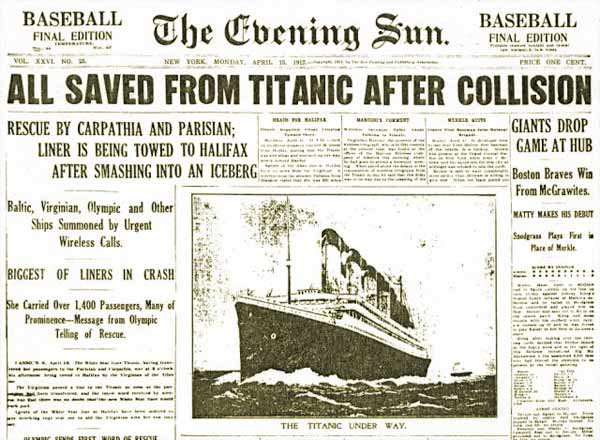 It was only later that the heartbreaking news came, that 1,513 people had perished.

In other words, there is a simpler and far more plausible explanation than what the claim insinuates, that Jane Standley and the media reports the news of WTC 7’s collapse before it actually happens.

If Jane Standley, the BBC, the media in general, together with the firefighters were all part of a conspiracy, it would mean that thousands of people participated and, to this day, all had kept their mouthes shut. That is not plausible, especially since it would be a giant sensation for a reporter to reveal.

The claim contradicts another claim, also made by the Truth Movement, namely that the collapse of WTC was sudden and unexpected4.

And finally, the claim is illogical because the so-called secret conspiracy is evidentially is not so secret that it doesn’t reveal the knowledge of the impending building collapse multiple times, live on television, with millions of viewers knowing about it.

Is the source credible or not?

The Truth Movement generally reject sources if they confirm the conclusions of the official investigations. But this claim presupposes that the source, in this case the BBC, is credible, thereby contradicting the general rejection of the aforementioned sources.

The Truth Movement often points to a comparison argument, to support the claim that explosives were used to destroy WTC 1, 2, and 7. The argument has the structure: “X looks like Y, therefore Y”:

At one point in her interview, Jane Standley descrribes the situation at Ground Zero like this:

If the possibility of Jane Standley, like any other reporter, makes a mistake during a chaotic live situation, is ruled out, and her words must be taken literally, it must also mean that the other six building in the World Trade Center complex was destroyed by a nuclear bombe. Anything else is garbling quotations.