Empire State Building was hit by a plane, but did not collapse

Empire State Building was hit by a plane but did not collapse0.

The claim indicates that World Trade Center 1 and 2 did not collapse due to being hit by the two planes and the ensuing fires.

Apart from the fact that both catastrophes include skyscrapers being hit by planes, all other facts are dramatically different. 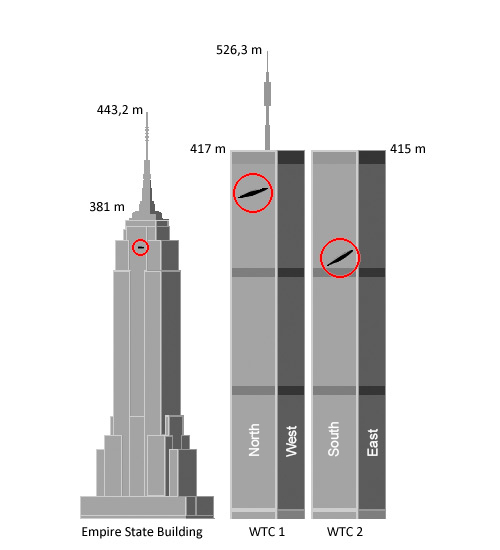 The Empire State Building catastrophe In 1945, the Empire State Building was hit by a B-25 Mitchell bomber plane, preparing to land, but instead the plane lost its course due to heavy fog. After the pilot had ignored orders from the ground, the plane collided with the building causing a fire which was successfully put out after 40 minutes. 14 people died and 26 were wounded.

The Twin Towers were hit by two Boeing 767 planes which were deliberately flown into the buildings. The planes weighed more than 150,000 kg and flew at speeds between 700 and 800 km/h. We are thus talking about planes 15 times heavier and moving at more than twice the speed.

Taking these substatial differences in planes, buildings, fuel, weight, and speed into consideration, the damages of the Empire State Building were relatively superficial compared to the World Trade Center 1 and 2.

The B-25 plane “only” made a hole on the facade of the building and started minor fires at, and close to, where the plane hit the building. The fire crew was able to put out all fires within 40 minutes. The two Boeing 767 planes penetrated deep into the World Trade Center 1 and 2 causing massive damage, even to the cores of the buildings, and started enormous fires which it was not possible to do anything about.

There are several factors that caused the fires in the World Trade Center 1 and 2 to be much more destructive than the fire in the Empire State Building. Inside the latter building, there were relatively small rooms which made it much more difficult for the fire to spread. The World Trade Center 1 and 2 had wide-open office spaces where the fires could easily get oxygen and continue to spread rapidly. Additionally, the fire proofing was blasted off the structure by the impact and huge fireballs. This was devastating for the steel structure and lead to weakening of the steel and eventually collapse of both towers.

Finally, the construction of the buildings were very different. The World Trade Center 1 and 2 were constructed as light as possible and consisted primarily of fire proofed steel with a steel and concrete core where the Empire State Building was enforced with cement and concrete.

It is besides any logic to compare the two events directly. Both the premise and proportion are untenable as evidenced by the facts listed above.

The claim also contradicts another claim from the conspiracy theorist Niels Harrit who, when referencing the World Trade Center 7, claims that office fires die out after only 20 minutes:

“The official explanation says that Building 7 collapsed due to an ordinary office fire but it has never happened before in world history.” 4

“An office fire lasts only for twenty minutes for the simple reason that there is no longer anything to burn. It should be mentioned that the office that burns here on the 12th floor, is where the Securities and Exchange Commission had offices. Then, NIST writes that, because they had so many unfinished cases, the fire in that type of office could last 30 minutes. But, other, if you go home…. that’s true… they talk about fire load, it depends on how much paper there is in the office. If you go home and set fire to your desk, it won’t last more than 20 minutes before the fire dies out unless you have many unfinished criminal cases lying about, then there isn’t any more to burn at that time.” 5

The fire at the Empire State Building burned for 40 minutes, before the fire was put out1.

The claim also contradicts another line of reasoning often presented by conspiracy theorists: A few witnesses at the World Trade Center 1, 2, and 7, who heard explosions, is considered evidence that there were explosives placed in the buildings. When the B-25 plane hit the Empire State Building, one witness spoke of the accident, with reference to the fear of the Japanese, whom the U.S. at the time was at war with:

”I thought it was a Japanese bomb”1.

There were also witnesses who were convinced that New York City was under bombardment.

If that line of reasoning should be applied here, these testimonials would mean that the Empire State Building accident was in fact a Japanese attack. In reality, the logical conclusion is, of course, that witnesses observe differently, meaning that a single testimonial must be held up against other witnesses, technical evidence, and documentation. If there is a clear conflict, the lone testimonial loses its validity. This is normal procedure in investigations and legal procedures.

The claim undermines another claim from the conspiracy theorists, namely that the media tells a different story than the one they reported when the terror attack on September 11, 2001, was underway (see related articles below). If we are to consider those testimonials describing a Japanese bombing attack as true, the media – e.g. the New York Times – were also involved in a conspiracy aimed to cover up what really happened. The newspaper’s front page on the day after the accident went like this:

The claim also contradicts these two claims pivotal for the conspiracy theories: The final straw is that the Empire State Building is not a steel construction but a cement and concrete one. It is therefore inconsistent to compare planes colliding with skyscrapers when it is also argued that the World Trade Center 1 and 2 could not collapse because both were steel constructions.