The editors behind 911facts.dk, Claus Larsen and Steen Svanholm, are available for lectures, courses and workshops about conspiracies.

Lectures, courses and workshops can be fitted to suit your needs: Length, content, price. We will always find a way that satisfies all parties.

Steen & Claus describe how the terror attack was planned and carried out by the terror organization al Qaeda, and what the catastrophe meant for the time following. Claus lived in New York City, and shares his personal experience. The lecture is well suited for history/social studies.

In this lecture, Claus and Steen deals with the most common conspiracy theories about the terror attack on September 11th 2001. We also unveil why some people become conspiracy theorists, and how to handle it.

Conspiracy theories – what are they?

In this course, Claus and Steen offer a practical guide for dealing with conspiracy theories.

For this workshop, Claus and Steen works together with you, to create a teaching track, for you and your students (15-years and up). The students will learn about issues like evaluation and verification of sources, the scientific method and critical thinking.

All lectures, courses and workshops are available in Danish and English.

“One of the biggest and best anti-conspiracy websites is run by a team in Denmark.”
Rob Palmer, columnist, Skeptical Inquirer

“Steen Svanholm and Claus Larsen have really dug into the mysteries of conspiracy theories. They know what they are talking about, and they have a lot of experience in communicating their knowledge. Because of the striking correlation between conspiracy theory and religion, we had invited them to give a lecture for the Union of Religious History in the fall of 2017, and we were not disappointed. Steen and Claus gave an entertaining lecture, with a string of well prepared arguments, analytical models and points of view with regards to the subject, and we could all go home wiser, after a very cozy evening in Copenhagen.”
Board of Directors, Union of Religious History

“In their talk called “Conspiracy theories – What? Why? Whereto?” Claus Larsen and Steen Svanholm presents their unique research into conspiracy theories in general, and 9/11 in particular. Their knowledge in the area is second to none and the delivery is excellent. Highly recommended!”
Pontus Böckman, Vetenskab och Folkbildning/Swedish Skeptics Association

“Thank you for a great and instructive course, and thanks for the site with all the good articles.”
Dorte Thelander Motzfeldt, VUC Vestegnen

“Thanks for a great course today. It was enormously educational, and we are looking forward to using your material and good ideas.”
Anders Bentsen-Bøhm, VUC Vestegnen 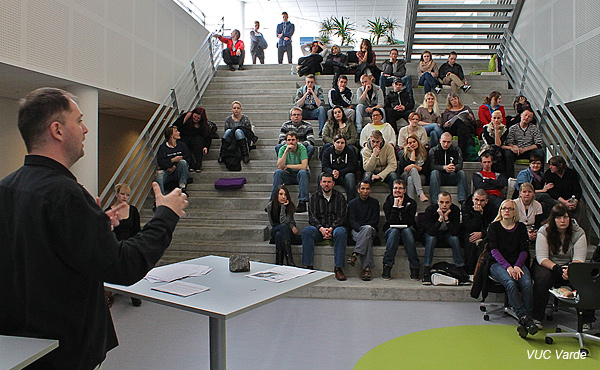 Thanks to photographer Christian Lindharth Nielsen

If you want to know more or book us, please contact us here: