How to “expose a cover-up”

Despite innumerable claims of solid evidence of the existence of the New World Order, it always turns out that the evidence is of more or less doubtful nature. One such example is this “exposure” from June 13, 2011, published on the blog Truth-out.org 0: 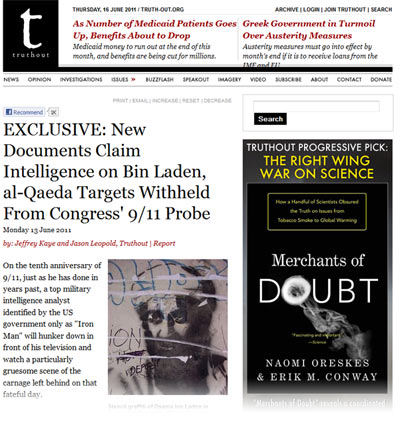 The main character is supposedly a former top analyst in the american military secret service. He insists on being anonymous using the pseudonym “Iron Man” after the american comic book superhero1. The secret service organization in question, Joint Forces Intelligence Command, is criticized by “Iron Man” for not passing on material that could be relevant for the National Commission on Terrorist Attacks Upon the United States, which was set up in 2002 to prepare a full and complete account of the circumstances surrounding the September 11 attacks. These new documents should prove that the authorities knew about impending terror attacks against the World Trade Center 1 and 2 and the Pentagon but did nothing to prevent them. The attacks should be carried out using hijacked planes2. “Iron Man” claims that the material was deliberately not passed on and thus is a cover-up of a conspiracy.

Was there prior knowledge of the attack?

“Iron Man” rattles off a number of reports, briefings, and conversations as evidence: Thus, we have only the word of an anonymous person’s word that the World Trade Center 1 and 2 and the Pentagon should have been named as the most likely terror targets. “Iron Man” refers specifically not to written documentation for this but only to what he believes to have heard.

Obviously, this approach is highly criticizable. It is quite unacceptable to plant rumors of an event several years after it happened, wait a while, and then have the authorities have the rumors sent to you with the intention of “exposing” previous knowledge about concrete acts of terror. It is a bit difficult to see how oral information should have been presented to a committee 2 years after. There will always be a lot of oral information given at any meeting where only the most important things are written down. Since no written account of any of the briefings exist, it can reasonably be concluded that the possibility of an attack by hijacked planes against the World Trade Center 1 and 2 and the Pentagon have been a purely theoretical discussion, if it was discussed at all. We only have the word of “Iron Man” that the issues have been touched upon. On the other hand, “Iron Man” has not been able to present a single concrete piece of evidence that the terror attack would happen as it happened. The written documentation referred to by “Iron Man” deals with general evaluations of different forms of possible terror threats: It is not a question of specific threats of specific locations at specific times. It is thus manipulative to claim that the authoritites knew the terror attack would happen. Naturally, it cannot be rejected out of hand that the conversations could have happened with the alleged content. But we also need to look critically at the fashion by which this “evidence” has surfaced and the conspiratorical context the “evidence” has been presented in. There is little doubt that this “expose” will enter the lexicon of conspiracy theories. But that does not make it more true. As a curiosity, the claim is also in conflict with the many other claims about the planes not having been hijacked by terrorists. If this story from “Iron Man” is regarded as true, it necessarily follows that the official account provides an accurate description of the terror attack on September 11, 2001.