No trace of Flight 93 There is absolutely no evidence of a plane crash at the Pennsylvania location.

This claim was made on 911facts.dk’s Facebook debate page on 15 May 2021 by the user Matthew Maguire, who, according to his information on Facebook, also calls himself “Last Prophet”, lives in Caseyville, Illinois, USA, and has studied at St. Matthew High School in Ottawa, Canada and works as “Jesus Christ”. 0

”Where should we start? How about there is absolutely no evidence of a plane crash at the Pennsylvania location well except what was given to the court which was a passport a bandanna and a box cutter. Everything else like wheels, engines, wings, tail section,seats, human remains or even blood. Nothing there. i will continue when you answer these instances one at a time.”1

There are plenty of remains from Flight 93’s crash, which took place in the United States on September 11, 2001, at 10.03 a.m. local time on a field in Stoneycreek Township near Shanksville in Somerset County, Pennsylvania, approximately 240 km northwest of Washington D.C.2

The National Transportation Safety Board (NTSB) is usually responsible for the investigation of plane crashes in the United States and is regularly assisted by the Federal Bureau of Investigation (FBI). However, in case of a suspected crime in relation to the crash, the roles are swapped with the FBI leading the investigation while the NTSB assists.3

According to the FBI, thousands of pieces of debris from the plane were found and collected at the crash site. Most of the pieces are not very large, but several are recognizable. 4 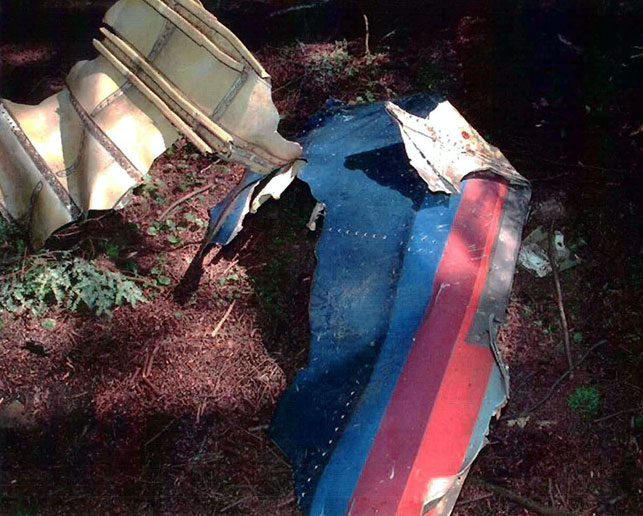 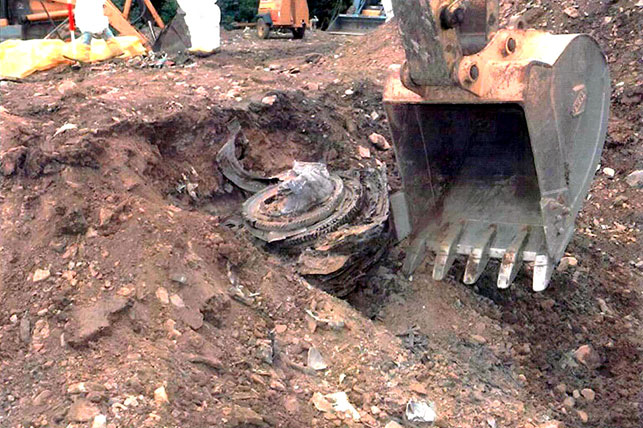 Quite a few of the photos of the debris have even been published, primarily during the subsequent lawsuit against the so-called 20th hijacker, Zacharias Moussaoui.5

95% of the debris found have since been handed over to the owner of the plane, United Airlines, and a few pieces have been put on display at the Smithsonian Museum of American History. 6 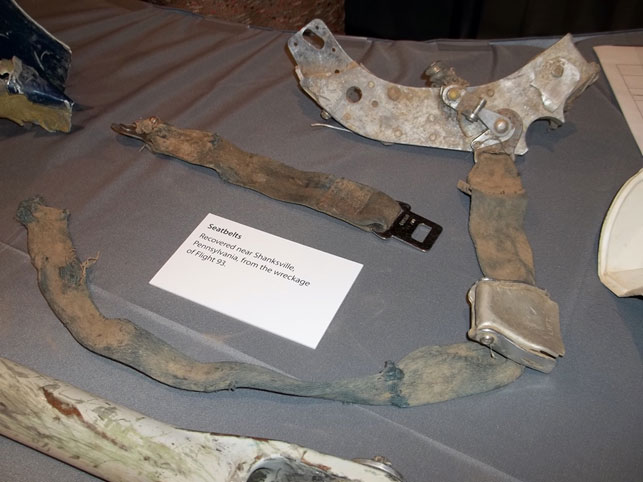 Even among conspiracy theorists, it is believed that there really was a plane and a crash at the site in question, although it is also claimed that the plane was shot down and not forced down by hijackers from al Qaeda. 7

As the plane collided with the ground at about 900 km/h, it was ripped into small and larger pieces8, many of the latter plunging deep into the ground forming a 12 meter wide impact crater, while others – the smallest parts – spread over a larger area. Some were even carried several kilometers by the wind, as described in more detail in this article: “Flight 93 was shot down. Nevertheless, rather large and easily recognizable pieces of debris from an aircraft have been recovered, e.g. this part of the fuselage: 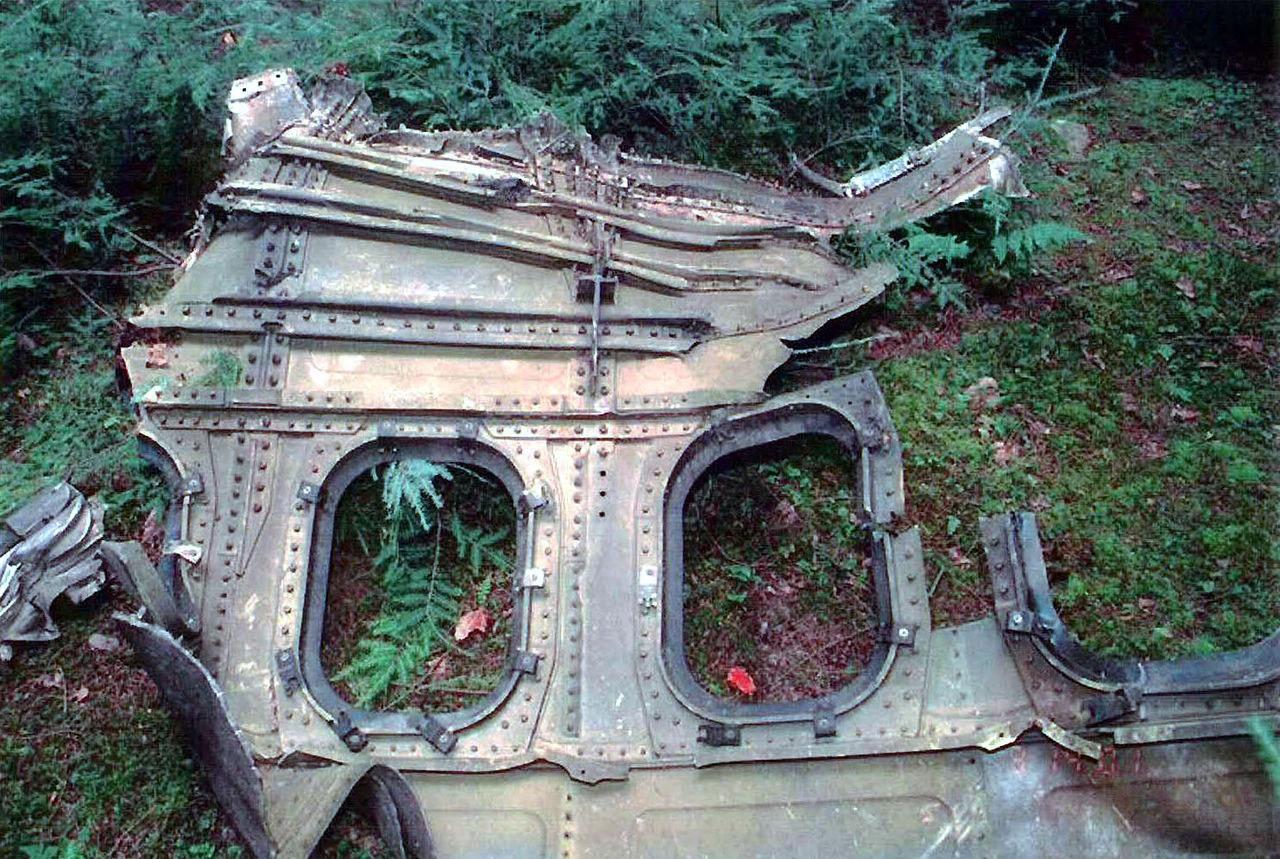 A number of smaller but recognizable items have also been recovered, including personal belongings and the crew’s logbooks.9

Among the debris, both of the plane’s black boxes were found in a condition where it was possible to access both the plane’s technical data and the sound recordings from the cockpit.

All flight data10, 11 have been published along with transcripts of the audio recordings12. The latter were played in court during the aforementioned trial against Zacharias Moussaoui, but most of the recordings have not been published, presumably out of respect to the relatives. Among the published parts are audio recordings of the hijacker Ziad Jarrah, who is believed to have taken over the pilot’s seat and commandeered the aircraft. Among other things, you can hear him over a loudspeaker telling the passengers that the plane has been hijacked, that there is a bomb on board, that the passengers must remain seated, and that they will return to the airport.13 The discovery of the black boxes has also made it possible to reconstruct the aircraft’s exact routes in a computer simulation. Here is an example:

Also found were remains of all the passengers, including the hijackers at the crash site.14 Not surprisingly, the remains were shattered, as most skeletal and tissue parts were almost consumed in the violent heat caused by the plane colliding with the ground. The largest piece of human remains was a spine joint.15 However, the parts were large enough for DNA to be identified from everyone on board and thus in combination with sets of teeth confirm each person’s identity. The hijackers’ DNA was identified by the exclusion method. The bodies of the passengers and crew have been handed over to the relatives so they could have something to bury.16 The hijackers’ body parts have been handed over to the FBI.17

It is standard practice on all commercial flights worldwide to keep accurate lists of everyone aboard, including passengers. In the event of a plane crash, the passenger manifests are crucial documentation, confirming or denying victims and missing persons, e.g., if they have disappeared at sea.

The passenger lists were used for this on all four hijacked aircraft 18, but also to identify the hijackers, a fairly simple investigative task given the hijackers were the only people on the four planes who could be linked together. This process is described in more detail here: The hijackers were identified too quickly.

The authorities have published radar data and transcripts of the communication 19 between the cockpit of the aircraft and the air traffic control in the area. Coupled with flight data from one of the plane’s two black boxes, the so-called Flight Data Recorder, Flight 93’s route and maneuvers have been completely mapped from start to finish.20

The FBI (Federal Bureau of Investigation) reports that they found 14 knives and parts of knives at the crash site, including a box cutter21 and a knife hidden in a cigarette lighter.22 Some of the passengers stated in telephone calls made from the plane that one of the hijackers had a bomb attached to his body. However, no trace of explosives was found at the crash site.21

United Airlines is missing their aircraft with registration number N591UA, which is of the type Boeing 757-222, which is identical to the registration that the NTSB made during their investigation of the accident, before the case was handed over to the FBI.23

The relatives of the 40 innocent people on board are missing their loved ones and have witnessed the burials of their earthly remains. Among them, the airline also is missing the two pilots and five cabin crew members. The 40 people and their efforts in the fight against the terrorists are commemorated and honored, among other things in a national memorial, Friends of Flight 93 National Memorial, built in Shanksville, Pennsylvania, not far from the crash site.24, 25

Several witnesses saw Flight 93 crash, and their testimonies are preserved. 26

Add to this the many investigators and rescuers who arrived at the crash site shortly after, together with a number of journalists and other representatives of the media27 as well as the 400 volunteers who helped.28

A number of photos were taken shortly after the crash and in connection with the rescue and investigation work.

One video was recorded shortly after the crash:

In addition, a number of videos have been recorded at the crash site in connection with the rescue work and media coverage.

37 phone calls were made by 13 people aboard Flight 93 after the hijacking. 35 of the calls were made via so-called air phones, which were mounted on the back of the last nine rows of seats. These calls have subsequently provided important information about what was going on. Not only do they confirm the hijacking itself; we have also learned that the hijackers used knives, that they forced their way into the cockpit, that they might have had a bomb, that they wore red bandannas, that the passengers were forced to the back of the plane, that at least one passenger was stabbed to death, that two people lay lifeless on the floor, presumably the captain and co-pilot, and that a member of the cabin crew was killed.29

The press and other media

Newspapers and media from around the world have described the 9/11 terrorist attacks, including Flight 93, in countless articles from virtually every angle. 30 In addition, countless books have been written and documentaries have been film based on facts about Flight 93.31

In other words, there is a considerably large and varied amount of evidence of Flight 93. The authorities have even published far more evidence from this the case than they would normally do in criminal cases.

The claim that there is no evidence of Flight 93 contradicts another claim from the Truth Movement and its allies, namely that Flight 93 was shot down. That claim is based on the fact that there were indeed debris from the aircraft, which the claim in this article says was not the case. Both claims cannot be true at the same time.

Even if the claim did not contradict another claim, it is still unlikely, because if it were true, it would involve an insurmountable coverup. It would include thousands of people such as relatives, rescuers, investigators, and authorities who would be lying and acting and continue to do so after all these years.

In the light of facts and logic, the claim is thus: