Plane engine is not from Flight 175 The engine found on Murray Street cannot be the one that Flight 175 was officially equipped with0.

When Flight 175 hit WTC 2, parts of the plane passed through the building to the opposite site. Parts of one of the engines was later found and photographed in Murray Street. The Truth Movement claims that this engine part does not come from Flight 175 because it appears to be mounted with cooling ducts that do not match the engine type of Flight 175.

He bases his claim upon two photos of spare parts of the cooling duct systems compared to photos of the crashed engine part. 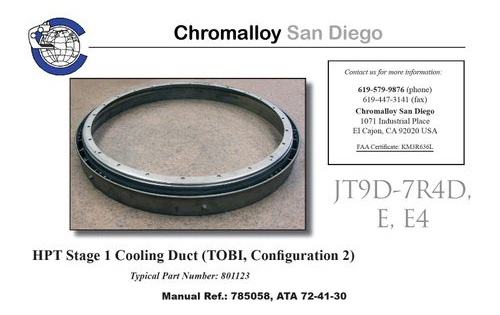 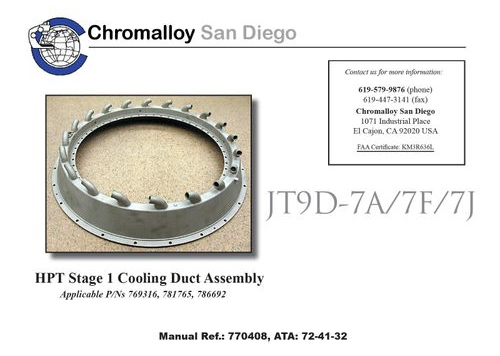 A variation of the claim suggests that the engine on Murray Street has been placed there deliberately to create the impression that WTC 2 was indeed hit by a passenger plane but that it was, in reality, hit by something else.2

Boeing 767-222 may be equipped with several types of engines4 but every plane of that type belonging to United Airlines carried only JT9D-7R4D engines.3

The editors are not familiar with any publicly accessible documentation that in detail shows how the two engines on Flight 175 were constructed.

Even though the engine on Murray Street seems to have perpendicular cooling ducts, just like the spare part of picture B that matches the JT9D-7A, -7F, og 7J engine types (Standard for Boeing 747 planes), this does not exclude that similar perpendicular cooling ducts may be present on a JT9D-7R4D engine (standard for Boeing 767-222 planes and thus Flight 175). The other picture may in principle represent any spare part whatsoever in connection with the turbine cooling system. The expression “Configuration 2” alone suggests that there are several variations. To put it simply, more precise blueprints and/or a more complete set of spare part photos are needed, in order to conclude anything.

The burden of proof weighs down even more by the fact that all other evidence points to the engine belonging to Flight 175. E.g., the fact that United Airlines lack a Boeing 767-2227, that the people on board Flight 175 are missing8, and that radar data9 and video recordings10 show a plane that physically matches Flight 175 hitting WTC 2.

There are no witnesses or other evidence that points to the direction that someone placed the engine on Murray Street for the occasion.

The claim implicitly suggests that if the engine does not match Flight 175, then WTC 2 was not hit by Flight 175 but by another plane. This problematic way of thinking raises even more questions and points to even more assumptions such as:

None of the people behind the claim give any evidence based answer to those assumptions. Therefore the claim fails the rule of Occam’s Razor; that the theory that needs the least amount of assumptions are normally the right one. But even if we ignore Occam’s Razor, we cannot disregard that the burden of proof lies with those who present the claim, and they, indeed, have not lifted the burden of proof.

It is internally contradicting to claim that the engine in Murray Street is a Pratt & Wittney JT9D-7A, -7F or -7J because that would mean that either WTC 2 was hit by a Boeing 747, which the photos and videos of the plane before impact contradict, since there are obviously only two engines on the plane, or that WTC 2 was hit by a completely unknown plane, designed to look like a Boeing 767-222 equipped with two engines that normally belong to a Boeing 747, and therefore are not calibrated at all to be placed on a Boeing 767.

The claim contradicts another Truth Movement claim, in which they say that a Boeing 767-222 cannot fly at 540 mph at 3,000 feet above the ocean, because of the air density, and that, for this reason, it cannot be Flight 175 that hit WTC 2. But in the claim above, they refer to a Boeing 747 where the aerodynamic properties do not increase nor decrease the probability of flying and making similar manoeuvers, due to the overall differences in aeronautical design between a Boeing 767 and a Boeing 747 when it comes to wings, tail, fuselage, elevator, etc., are not radically different in design compared to for example a Concorde or an F16.

Similarly, it is absurd to point to a Boeing 747, simply because it is very hard to miss the quite obvious differences in length and design, between a Boeing 767 and Boeing 747. 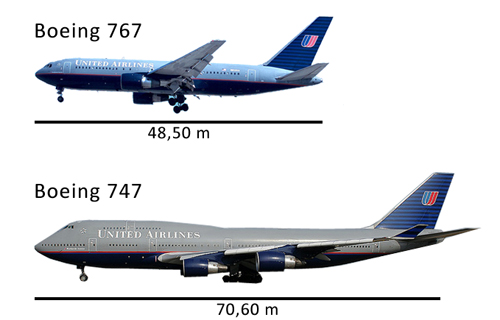 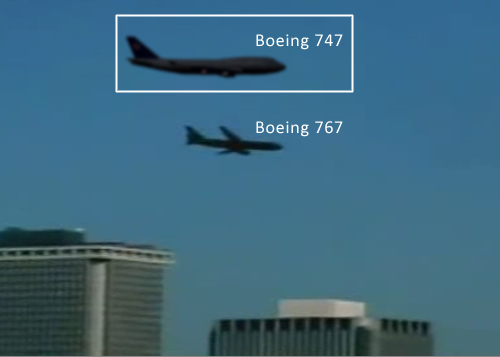 The variation of the claim that indicates that the engine was placed contradicts the main claim in such manner that if the engine had indeed been placed for the occasion, it would reveal nothing about what hit WTC 2, in which case, it could just as well have been Flight 175.