The hijacked planes could have been intercepted by military planes

The hijacked planes could easily have been intercepted by military planes. In 1999, a plane was intercepted 16-21 minutes after losing radio contact.

“On October 25, 1999, at 9:33 a.m. air traffic controllers in Florida lost touch with a Learjet carrying golfer Payne Stewart and several companions after it left Orlando headed for Dallas, Texas. Nineteen minutes after Air Traffic Control realized something was wrong, one or more US Air Force fighter jets were already on top of the situation, in the air, close to the Learjet. Moreover, throughout the course of its flight, Payne Stewart’s jet was given escort from National Guard aircraft coordinated across state lines.”0

In 1999, Air Traffic Control lost contact with a Learjet 35 on its way from Orlando, Florida, to Dallas, Texas. On board were two pilots and four passengers, one being the famous golf player Payne Stewart. An F-16 from Eglin Air Force Base, Florida, which happened to be in the area, was dispatched to localize the plane but was unable to make contact. Two more planes were dispatched, also to make contact, but this was also in vain. The Learjet continued its course until it ran out of fuel, after which it crashed.1 This incident is used to argue that the hijacked planes on September 11, 2001 were intentionally not intercepted by military planes.

The claim is based on an erroneous assumption that the United States only have one timezone. The American National Transportation Safety Board investigated the accident 2. The following describes when contact with the plane happened and when the first military plane reached it:

“At 0927:10 EDT, N47BA called the Jacksonville ARTCC controller and stated that the flight was climbing through an altitude of FL 230. At 0927:13 EDT, the controller instructed N47BA to climb and maintain FL 390. At 0927:18 EDT, N47BA acknowledged the clearance by stating, “three nine zero bravo alpha.” This was the last known radio transmission from the airplane. The sound of the cabin altitude aural warning was not heard on the ATC recording of this transmission. At 0933:38 EDT (6 minutes and 20 seconds after N47BA acknowledged the previous clearance), the controller instructed N47BA to change radio frequencies and contact another Jacksonville ARTCC controller. The controller received no response from N47BA. The controller called the flight five more times over the next 4 1/2 minutes but received no response. About 0952 CDT,7 a USAF F-16 test pilot from the 40th Flight Test Squadron at Eglin Air Force Base (AFB), Florida, was vectored to within 8 nm of N47BA. About 0954 CDT, at a range of 2,000 feet from the accident airplane and an altitude of about 46,400 feet, the test pilot made two radio calls to N47BA but did not receive a response. About 1000 CDT, the test pilot began a visual inspection of N47BA.”3

It didn’t take 15-21 minutes, from losing radio contact with the plane until the F-16 reached it, but all of 87 minutes. The F-16 was already in the area, so little time was used to actually reach the Learjet. It would also have been easier to track a Learjet on radar than localizing the four hijacked planes: The transponders on all four planes were switched off, right after the planes had been hijacked, which meant that Air Traffic Control was forced to track the planes on primary radar alone. This was an impossible task, since the air space was far more busy than the area that the Learjet was flying in. 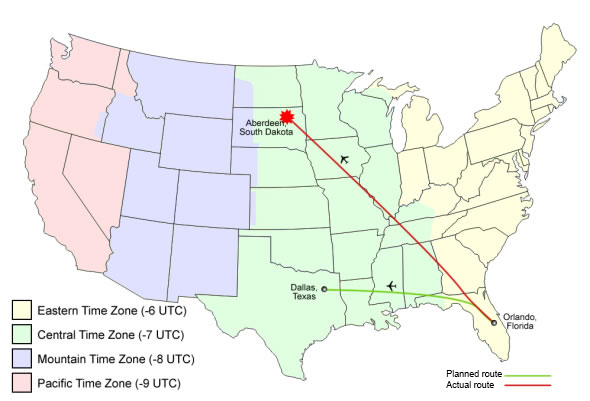 The claim acknowledges that there were hijackers which contradicts another popular claim from the Truth Movement, namely that there were no hijackers at all. Instead, the planes were allegedly remotely controlled. It is also self-contradicting that the conspiracy theorists on one hand find it suspicious that military planes wer not able to reach the hijacked planes and on the other find it suspicious that at least one military plane was able to reach Flight 93, ostensibly to shoot that plane down.