No plane hit the Pentagon

No plane hit the Pentagon.0

The claim points to something else than Flight 77 hitting the Pentagon, which would mean that the terror attack was not carried out by Islamic terrorists.

There is disagreement in the Truth Movement what damaged the Pentagon instead of Flight 77. One of the most popular theories is that it was a bomb detonated from within the building 1. Another theory is that it was a missile, either a Global Hawk drone or a Tomahawk cruise missile, remotely controlled, far away from the Pentagon 2.

The claim also includes the claim that the debris found at the Pentagon was not from a Boeing 757 3.

Additionally, the Truth Movement has proposed a parallel claim that the flight motor parts and landing wheel that was found at the Pentagon fit a Global Hawk drone 4.

There is no evidence that points to other explanations.

Three witnesses have said that they thought it was a bomb. These three were all inside the Pentagon building and could not observe either the plane or the impact of the plane and could not have seen a missile either 17.

No evidence of a conspiracy

Lack of photographs
There are a number of self-contradicting aspects of this claim.

The most obvious is that if it really had been a planned hoax, it would have been easy to present faked photographs, or videos, clearly showing a plane hitting the Pentagon. This was not done. Only frames from the surveillance cameras exist where it is difficult to recognize a plane. This means that the alleged conspirators on one hand would be able to blow up the building, place tons of debris from a similar plane, bribe hundreds of witnesses, but not be able to manufacture one single faked photograph.

The Truth Movement argues that there could not have been a plane at the Pentagon, because there are no pictures of a plane. The same goes for the alternative theory about a remotely controlled missile or a Global Hawk drone. No photographs of either of these exist.

Additionally, the Global Hawk drone was still in development in September 2001 and not operational until the war in Afghanistan that started in October 2001 17. If it really was a Global Hawk drone that hit the Pentagon, it would immediately have revealed where it came from and would thus have exposed the whole conspiracy.

A simple comparison of a Global Hawk and a Boeing 757 also shows the absurdity of that claim 18: 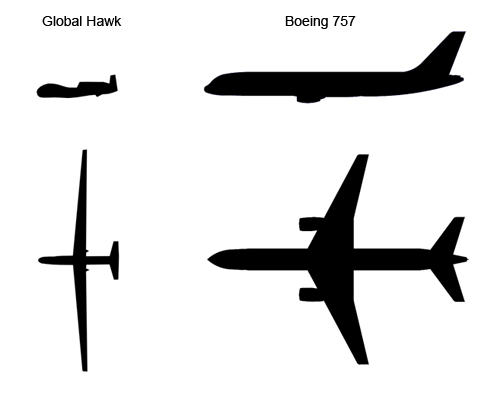 It would also have been the first time a Global Hawk drone was used to destroy a building. But according to the Truth Movement, it is impossible that an event happens for the first time (see the article “High-rises on fire have never collapsed”.

How do we solve that problem? We apply Ockham’s Razor.

Ockham’s Razor is a basic philosophical principle in science. It was first stated by a Franciscan monk, William of Ockham (1285–1349). It states that in case you have two explanations, you should choose the one with the fewest assumptions.

For example: In olden days, Danish farmers would put out a small bowl of porridge with a lump of butter on top for the farm nisse. The bowl would be empty next morning.

We can propose at least two possible explanations:

Since no evidence has ever been presented (outside folklore) that a nisse exists, and since cats are plentyful on farms, it would be correct to conclude that it was the cat that ate the porridge.

It should be stated that Ockham’s Razor does not automatically point to the correct conclusion if the data is insufficient. In the example above, the culprit could also have been a hungry farmhand. But as a pragmatic solution, Ockham’s Razor has proven itself scientifically to be a very efficient tool. Ockham’s Razor cuts through everything that is not based on evidence and leaves the most reasonable conclusion.

Applied to the claim in question, we must realize that:

Bomb
It is also argued, albeit less often, that the Pentagon was blown up from the inside by a bomb. The claim is supported by a few witnesses that heard the collision and the explosion and interpreted that as a detonating bomb 19. But if it had been a bomb, the alleged conspiracy would have no reason to claim otherwise, for a bomb that kills hundreds, and destroys part of the building, would have been terrifying enough in itself.

However, the bomb claim presents another problem for the conspiracy theorists. If there was a bomb, it would contradict the conspiracy theorists claim that the United States does not let itself be surprised by primitive means and unsophisticated people such as Islamic terrorists. But since Islamic terrorists are known for using bombs as a weapon of terror, a bomb in the Pentagon would almost unanimously point to Islamic terrorists and not a sophisticated technological plot planned and carried out by a conspiring secret internal power, in this case, the U.S. Government, the U.S. Military, and wealthy Jewish magnates.

It should be noted that al Qaeda succeeded in bombing the World Trade Center 1 in 1993 20. The bomb attack was intended to make one tower fall into the other and kill thousands of people. Al Qaeda was also behind the attacks on two American embassies, in Dar Es Salaam, Tanzania 21 and Nairobi, Kenya22, which were bombed on the same day, August 7, 1998, and when the American destroyer, U.S.S. Cole, was hit by suicide bombers in Aden, Yemen, on October 12, 2000 23. Al Qaeda has also carried out numerous bomb attacks in Northern Africa 24, the Middle East 25, and Kashmir26. The Danish embassy in Islamabad, Pakistan, was likewise hit by an al Qaeda bomb on June 2, 2008 27.

Debris
Occasionally, it is claimed that the debris from the plane was placed there in order to make it look like a passenger plane. If this is the case, it was done very clumsily, since all kinds and sizes of debris were placed. The simple plan would have been to place very recognizably, e.g. large pieces of debris, with clear identification numbers on them, and to make sure that a photograph of it was published worldwide.

Remote control
When viewed together with the attacks on the World Trade Center, the self-contradictions are even more pronounced. Conspiracy theorists claim that the planes that hit the World Trade Center were remotely controlled 28, but this must mean that the plane at the Pentagon was also remotely controlled. This claim is also hinted at, by some conspiracy theorists, because the plane flew a very complicated route. But if that is the case, it merely confirms that there really was a plane at the Pentagon, which contradicts the claim that it was a missile or a bomb.

The crazy spins out of control if remotely controlled planes were used in the attacks on the World Trade Center, but at the same time a missile or drone – claimed to be a plane – in the attack on the Pentagon. This would not only be clumsy and dreadfully complicated because it would be necessary to haul a lot of debris on to the site, bribe a lot of witnesses, and make sure that the surveillance cameras did not show a plane.

All things considered, the terror attack on September 11, 2001, is perhaps one of the best-documented catastrophes in the history of mankind. Considering the scope of the catastrophe, much more information have been made public than what is usually expected when a plane has crashed. This has been done out of concern for the bereaved and the far-reaching consequences of the attack itself.