There were two planes, but three buildings that collapsed

Two planes cannot possibly make three buildings collapse, if only two of the buildings are hit by the planes0.

The claim is used to support the claim that the Twin Towers did not collapse due to the damage caused by the planes, and the subsequent planes, and furthermore, that the collapse of the towers showed clear signs of controlled demolitions, where demolition experts have placed explosives strategically in the buildings’ structure. At a certain time, the explosives are detonated, destroying the buildings, with as little damage to the surrounding buildings as possible.

The World Trade Center complex consisted of seven buildings: The Twin Towers (WTC 1 and 2), and five other buildings, WTC 3, 4, 5, 6, and 7. Members of the Truth Movement have not concerned themselves in particular with four of the other buildings that were also destroyed in the attack. The focus has been on WTC 1 and 2, and on WTC 7 in particular, which has been regarded as “the loaded gun”1. The reason for this is that WTC 1 and 2 “collapsed in their own footprints”, causing minimal damage to the surrounding buildings. It is argued that it would be impossible for WTC 7 to collapse seven hours later, if WTC 7 was not particularly damaged, and without uncontrollable fires.

These following factors are deemed essential for the claim:

*) Having an effect on the collapse

All seven buildings in the World Trade Center complex were destroyed during the attacks.

World Trade Center 3, 4, 5 and 6
The collapse of the Twin Towers resulted in serious damage to WTC 3, 4, 5 and 6. None of the buildings could be saved.

World Trade Center 7
When WTC 1 collapsed, some of the falling debris hit WTC 7. The debris damaged the facade of the building and started fires on several floors. None of the fires could be fought which led to the collapse of the building about seven hours later.

In reality, it is “two planes and seven buildings” (if you only count the attack in New York).

*) Having an effect on the collapse
When looking at the photographs of the World Trade Center complex, it becomes clear that WTC 3, 4, 5, and 6 all were seriously damaged. 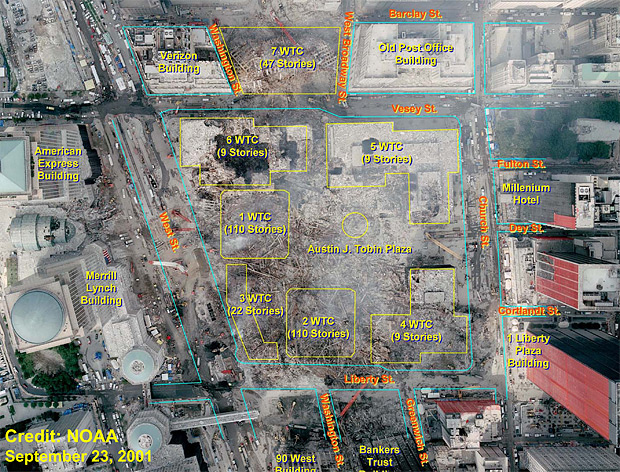 The only two things that make WTC 7 different from WTC 3, 4, 5, and 6, is that WTC 7 was not destroyed immediately after the collapse of WTC 1 and 2, and that WTC 7 is a high-rise building. However, it isn’t the height of WTC 7 that is the issue nor the degree of destruction from WTC 1 and 2’s collapse, but whether WTC 7 was seriously damaged by debris and the following fires.

Since it is also claimed that WTC 1 and 2 “collapsed in their own footprints”, and that the debris from those buildings was so insignificant that there was little damage of the surrounding buildings, it follows that the four buildings, WTC 3, 4, 5, and 6, must have been destroyed for the same reason as WTC 7 was, if the claims regarding WTC 7 are true.

The lack of interest from the Truth Movement, regarding these four buildings, is particularly problematic. It is obvious that one building, WTC 7, is singled out, with cherry-picked characteristics, leading to only one conclusion, namely a controlled demolition, using explosives and (nano)thermite in enormous quantities, strategically placed in advance in the building.