Flight 77 did a complicated 330 degrees turn before it hit the Pentagon0.

The claim is used to support the claim that Flight 77 was not flown by one of the hijackers, Hani Hanjour, because the maneuver was supposedly too complicated for an untrained pilot. The claim is thus used to support the claim that Flight 77 was remotely controlled, which again should point to someone other than al Qaeda being involved in the terror attack on September 11, 2001. Instead, the attack was a so-called “inside job”. The claim leads to yet another claim: That it wasn’t even Flight 77 that hit the Pentagon but a Global Hawk drone.

In 2006, the National Transportation Safety Board (NTSB) published radar data from Flight 77’s route1. The data shows that Flight 77 does a 330 degrees turn, just before it hits the Pentagon. 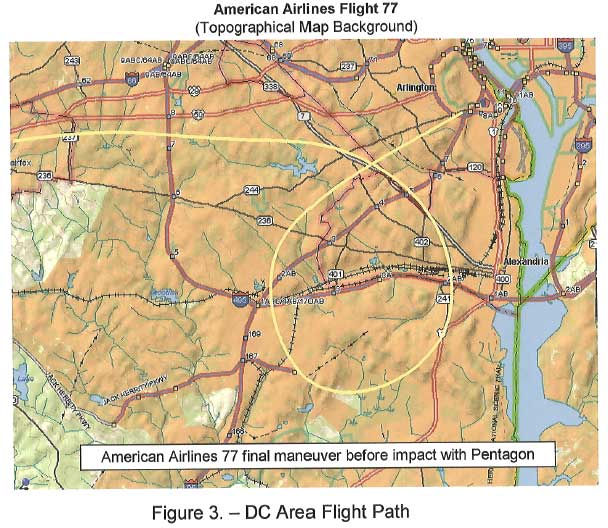 There can be any number of reasons for this turn, but one could be that the plane, when approaching its intended target, is at a too high altitude: The data shows that the plane dived, from 8,000 feet at the start of the turn coming out at 2,000 feet.1 The maneuver has been tested and found likely in simulator tests2. Critics of the official account have likewise tested the maneuver several times in a simulator but came to the conclusion that it was impossible3. It has also been demonstrated that it is possible to crash a passenger plane at a particular spot, when the plane is airborne, even with relatively few flying lessons4. On the other hand, it is quite unlikely that the plane was remotely controlled. For one, all systems on board can be overruled by the pilots. There is no documentation showing any type of remote controls on board the plane. Nothing speaks in favor of it being easier to remotely control Flight 77 to fly its route than doing it manually. Documentation, e.g. in the 9/11 Commission Report about the terror attacks, shows that Hani Hanjour had a pilot’s license to fly commercial passenger planes, having clocked hundreds of flying lessons, despite him never working as a pilot and him being considered a not very good pilot5. But he cannot be described as untrained. There are no witnesses who have come forward to testify that someone had installed remote control equipment in Flight 77, or that someone had taken control by remote control. There are no documentation or technical evidence that Flight 77 was remotely controlled. Regarding the theory of a Global Hawk drone, there are no witnesses who saw one, and no debris come from such a drone. Additionally, the Global Hawk drone was not yet functional on September 11, 20016. Two members of the Truth Movement Frank Legge and Warren Tutt contacted the authorities and were sent data from the plane’s Flight Data Recorder. Based on a very thorough investigation of these data, the two have – to some consternation to many in the movement – concluded that the route of Flight 77 concurs with the official account7.

The claim is self-contradicting compared to another popular claim from the Truth Movement, namely that it was not a passenger plane that hit the Pentagon. If you claim that the maneuver of Flight 77 is evidence of the plane being remotely controlled, and thus an inside job, you have also acknowledged that Flight 77 really was at the Pentagon. There cannot be a passenger plane and not be a passenger plane. Another self-contradiction is that, if it really was an inside job, it is absurd that the almighty conspiracy has allowed all these “suspicious” data regarding the flight to be published, thereby exposing itself. It would have been very easy to falsify data, e.g. so the “suspicious” turn of 330 degrees did not show up in the data at all. One could even argue that the maneuver pointed to the pilot not being all that proffessional, because then both altitude and velocity would have been correct, so a 330 degree turn would not have been necessary. That such a turn was necessary points more to hijackers with mediocre pilot qualifications, improvising along the flight, than to a precisely calculated strategy, using advanced and unknown remote control technology. It is a good question why some in the Truth Movement concludes that the flight route is possible, while others do not. This leads to two lines of reasoning: Another self-contradiction exists, at a higher level, regarding Flight 93, which crashed near Shanksville, Pennsylvania. If Flight 77 was remotely controlled, then Flight 93 should also have been, since the two planes were part of the same masterplan. But if Flight 93 was remotely controlled, it makes no sense if it suddenly crashes before hitting its intended target. Finally, there is a remarkable self-contradiction embedded in the ensuing claim that the plane must have been remotely controlled. If we are to follow that reasoning, it quickly becomes obvious that the most efficient way to do that, would be from a flight simulator. But the Truth Movement insists, e.g. by pointing to Jesse Ventura’s show, that it cannot be done via such a simulator.