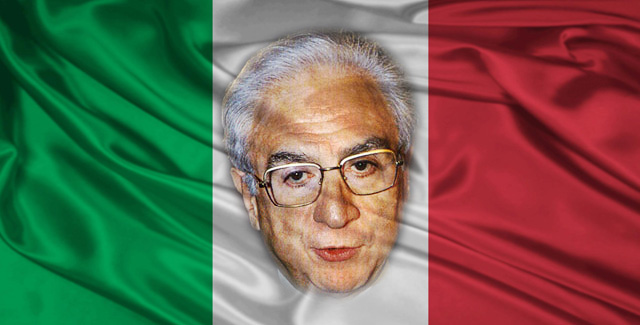 Francesco Cossiga, former Italian President, said in 2007 that it were the CIA and Mossad who carried out Operation September 11, and that this is “common knowledge” in the intelligence community0.

The claim has been circulating in the Truth Movement for years and is an example of what the movement calls “whistle-blowers”, people who reveal to the world that they have knowledge that the terror attack on September 11, 2001 was really a conspiracy planned and carried out by the American government, the American military, and many others. The quote is also used by the Danish Truth Movement i11time.dk.

Francesco Cossiga (1928-2010) was an Italian politician and the country’s 43rd Prime Minister from August 1979 to October 1980. He was also the 8th President of the Republic of Italy from July 1985 to April 19921. In his final years as President, Cossiga began to make statements that, by many, were considered unsuitable and transgressed his constitutional powers. Some commentators expressed doubts about his mental capacity. The claim derives from an interview from 2007 in the Italian newspaper Corriere della Sera2, where Cossiga was quoted regarding a video of Osama bin Laden:

“Sources close to Palazzo Chigi, the nerve center for the Italian intelligence agency, point to the non-authenticity of the video, which is determined by the fact that Osama bin Laden “confessed” that al Qaeda was behind the attack on the Twin Towers on September 11, while all the democratic circles in America and Europe, in particular the Italian intelligence agency, know very well that the catastrophic attack was planned and carried out by the American CIA and Mossad, with the help of the Zionist world, to accuse the Arab countries and to persuade the Western powers to go into Iraq and Afghanistan.”

During the interview, Cossiga also accuses his political opponent Silvio Berlusconi for having ordered the video of Osama bin Laden at Mediaset, the biggest media house in Italy, which Berlusconi controls. The quote that i11time.dk is using is cut short, so it says nothing about Cossiga accusing Berlusconi for being behind a fake video of Osama bin Laden, and it says nothing about Jews being accomplices in the terror attack on September 11, 2001. There is no evidence that Francesco Cossiga’s claim is true. By contrast, the claim is selectively used to accuse the CIA and Mossad, but not the Jews and Berlusconi.

It is important to bear in mind that Cossiga does not speak as someone who has had access to the inner circle in the state apparatus. In the years between the terror attack and the interview, Cossiga held no real political power. Likewise, it cannot be ignored that Cossiga and Berlusconi were political opponents. Clearly, Cossiga’s intention was to smear his political opponent, not reveal a secret conspiracy. That makes it hard to take his “revelation” seriously. It is not clear why the Danish Truth Movement  has chosen to edit out the accusations against Berlusconi and the Jews. One explanation could be that it would seem less credible to include Berlusconi and the Jews . If that is the case, they choose selectively to believe Cossiga without question, when he accuses the CIA and Mossad for being behind the terror attack, while, at the same time, not believing Cossiga, when he claims that Berlusconi and the Jews were involved. Another explanation is that the Truth Movement does not publicly want to accuse the Jews of being part of the terror attack on September 11, 2001, while there are no qualms about believing it, within the movement, away from the public eye. In that case, the Truth Movement is trying to get public support for an investigation and a legal showdown, where it is only later revealed that the Jews were also behind the attack. The public is thus tricked into participating in persecution of the Jews. When the investigation is underway, it will be too late to stop the process. Regardless of what the explanation might be, the meaning is crystal clear: The Truth Movement is seeking to hide the whole truth about the terror attack on September 11, 2001, from the public. This is in direct conflict with the Truth Movement’s stated goal, namely that everything concerning the terror attack must be revealed to the public.