CIA ordered visas for 15 of the hijackers 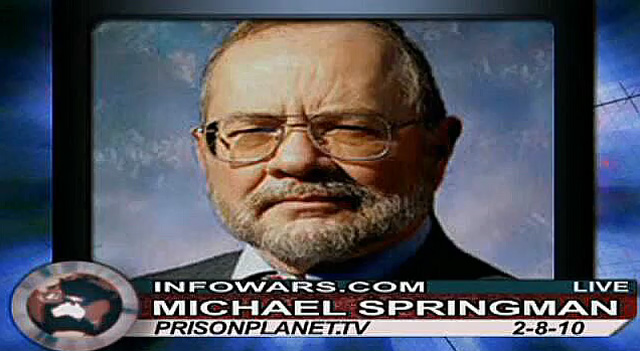 CIA ordered visas for 15 of the hijackers0.

J. Michael Springman is a former employee at the American Consulate in Jeddah, Saudi-Arabia. During an interview with radio host Alex Jones, he claimed that, despite him refusing to grant 15 of the 19 hijackers visas for the United States, because they were on a watchlist, the CIA ordered him to grant the visas anyway.

Prior to the interview, Alex Jones says the following0:

“J. Michael Springman worked for the US Government for 20 years, for the Foreign Service, and Consulate. He went public with a story of his involvment in a large scale… exposing a CIA operation that brought hundreds of people from the Middle East to the U.S., issuing them passports, and being trained inside the U.S.”

The claim is also made by a spokesperson from the Danish Truth Movement, Jeppe Severin1.

The evidence
There are several problems with Springman’s claim. First, Springman makes it clear in the video clip that the 15 did not arouse any suspicion:

He continues by telling how he was informed that those people should be granted visas to the United States anyway. Springman then claims that those people were in the process of being recruited to the war in Afghanistan, against the Soviet invasion force, with the goal of destabilizing the situation in that country to undermine Soviet control.

Second, it isn’t Springman who denies the visa applications for the 15 persons since his employment stretched from 1987 to 1989, eight years before the first of the hijackers, Hani Hanjour, was granted a visa which happend on November 2nd, 19972.

Despite this, Springman claims that it was the same CIA operative who granted visa to the 15 persons included in the claim. Springman concludes that, since a minor operation was underway to recruit people to destabilize the situation in Afghanistan, it must mean that it was a deliberate move by the CIA to let the 15 persons into the United States eight years later.

Springman does finish by admitting that he has no evidence whatsoever.

The four
It must be remembered that the claim does not include all 19 terrorists but the 15 who had Saudi citizenship. This means that there are no claims regarding why the four who were not Saudi citizens could enter the United States. The four are these:

List of where and when the hijackers got visas2 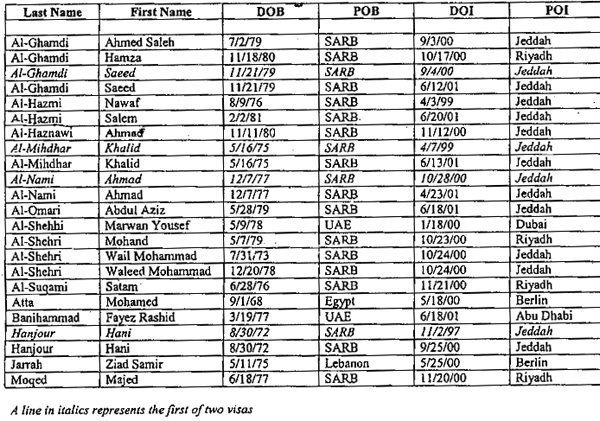 The list shows that four were granted visa to the United States more than once:

We can be certain that the 15 people were not being accused of anything illegal, or were wanted by the United States, since their visa applications would certainly have been denied.

There can be a number of reasons why American authorities want to take a closer look at a person wanting to enter the United States. It could the the travel pattern where the person has many entries and exits without any clear reason, a suspicion of smuggling, or prior criminal convictions.

After the terror attack on September 11, 2001, so-called “no-fly” lists were instigated3. These lists were used to evaluate if persons were allowed to enter the United States by plane. The lists do not show that the persons on the list are terrorists wanted for acts of terror. The lists only establish if the persons are too high a risk to board a plane destined for the United States. The persons on the lists are not automatically denied entry into the country, it must merely take place at a harbor or a border crossing.

It should be noted that foreigners are allowed to enter the United States unless the authorities have a very strong case against them doing so. This is primarily due to the United States being a constitutional state where not only citizens but also foreigners have certain rights.

This also applies to members of the Truth Movement. The members think of themselves as persecuted and oppressed by the American government because the members, according to themselves, “reveal” that the government is behind the terror attack on September 11, 2001. However, the members have no problems entering or leaving the country without being arrested. If the claim that American authorities are smuggling hundreds of Saudis into the country illegally to train them in terror activity is true, it should be a small effort for the same authorities to deny entry for the relatively small group of people in the Truth Movement. This is not the case.

Oddly enough, the claim is based on a source that supports the official account: Springman says clearly that there were 19 terrorists. This particular claim therefore contradicts the claim there weren’t any terrorists at all.

is a logical fallacy, called post hoc ergo propter hoc: Since B followed A, B must be caused by A. Since these 15 turned out to be hijackers, their visas must be the result of CIA letting them enter the country.

The claim is only made after the fact that the 15 out of the “hundreds” turned out to be hijackers. The conclusion is not based on evidence found before the terror attack but is merely concluded that because they gained entry, it must be a deliberate decision from the overruling authority, in this case the CIA.

The claim is weakened by the fact that the 15 make up a very small part of the “hundreds” of Saudis who were granted visas during that time. The most plausible explanation is that the consulate did not find any valid reasons to deny the group their visas. They were thus legally entitled to them.

It is the typical conspiracy theorist mindset to consider these “hundreds” incriminating where, as exemplified in Alex Jones, everyone is suddenly suspected of having been allowed into the country illegally by the CIA to be trained for acts of terror.

A more correct wording would be:

“CIA did not find any reason at that time to deny visas for the 15 persons.”

The fact that four of the persons were granted visas to the United States more than once means that the secret conspiracy regarding the terror attack on September 11, 2001 must have been in operation since 1997 given that Hani Hanjour was granted a visa at that time. This is before the main suspect behind several terror attacks against the United States, Osama bin Laden, first became a wanted man on March 16th, 1998. Libya accused Osama bin Laden and three others of the murder of Silvan Becker, an agent for Germany’s domestic secret service, back in 19944 The United States did not issue a warrant for the arrest of Osama bin Laden until June 8th, 19985.

Ultimately, the claim that “hundreds” of Saudis being sent to the United States for terrorist training is based on racism: Regardless of whether you are guilty or not or what age you have, you must be a terrorist merely because you come from Saudi Arabia. A whole population – Saudi Arabia consists of nearly 30 million people – thus is labeled as terrorists who must at all costs be kept out of the United States.

A risk of X is considered evidence of X, which is applied to the whole ground, and not to those few later to be found actually being terrorists.

It would be against a constitutional state if citizens are considered guilty merely because they are under supervision. Such a society would even surpass former East Germany where citizens were being monitored on a grotesque level. As a citizen, you were automatically under suspicion merely because you were a citizen. If whole populations are being excluded merely because of their nationality, the consequence would be that a whole country’s citizens would be guilty if the authorities have reason to keep an eye on a small number of them.