Shock waves blew out window of buildings more than 100 meters away, even down in the lobby0.

The claim insinuates that the explosions from the impact from the planes were so violent that the planes either carried explosives, or they hit exactly where a lot of explosives had been placed in advance.

Two planes hit the World Trade Center 1 and 2 on September 11, 2001. The impacts resulted in huge booms, shock waves, and fireballs, where the two planes had hit the buildings.

The World Trade Center 1 and 2 had elevator shafts through the middle of the buildings. These shafts allowed shock waves to travel down through the buildings carrying with them burning jet fuel.

The impacts caused explosion-like fireballs on several of the lower floors, e.g. in the lobby of World Trade Center 1. The shock was so powerful that it knocked off marble panels close to where the elevator shafts were. People and objects in front of the elevators were also burned1.

There are no witnesses in or about the World Trade Center, who, prior to the terror attack, have seen or heard about explosives being placed in the buildings or observed suspicious activity that could cover up such an operation.

No trace or remains of explosives have been found in the ruins of the World Trade Center.

There are no audio- or video recordings that reveal typical booms from exploding bombs when the planes hit the buildings, apart from the booms that the impacts themselves caused. There were no extra detonations which would have been easily spotted, given that they would have been totally unexpected.

Seismographs have not registered any secondary detonations.

Conventional explosives used for controlled demolitions of buildings make very characteristical booms and flashes when detonated. No videos show any such flashes, and no audio show any such booms, either in connection with the impacts or later on.

The claim, when taken literally, is true: It becomes misleading when smashed windows in the neighborhood and the lobby is taken as evidence of either planted explosives on board the planes or explosives in the buildings themselves.

The forces of the impacts of the planes were very large. The impacts released shock waves which – quite as expected – traversed down inside the buildings and to the nearby buildings.

Such a shock wave follows the principle of “the path of least resistance”, which means that it will go furthest where it meets the least resistance. The shock wave, thus following the laws of nature, moves faster down through the elevator shafts, which primarily are filled with air, and thus can reach the lobby faster, where it then meets resistence in the shape of walls, windows, and people, all of which received damage of various degrees.

Likewise, it is natural for the shock wave to move far in open space away from the impacts in the World Trade Center 1 and 2 towards the nearby buildings, where some windows were broken, but where the structure itself was left intact.

Thus, it is not mysterious at all that windows up to 100 meters away were shattered. The shock wave from the planes’ impacts, together with the exploding jet fuel, were much more powerful than singular detonations of conventional explosives used in controlled demolitions. 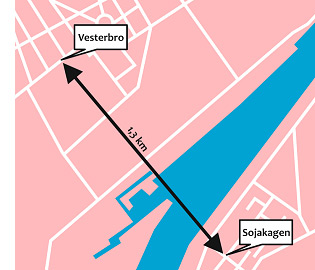 A similar example: When Danish Soy Cake Factory (“Dansk Sojakagefabrik”), Copenhagen, exploded in 1980, the shock wave was so powerful that it broke windows in an area of one kilometer away2.

“Operations. A battalion chief and two ladder and two engine companies arrived at the North Tower at approximately 8:52. As they entered the lobby, they encountered badly burned civilians who had been caught in the path of the fireball. Floor-to-ceiling windows in the northwest corner of the West Street level of the lobby had been blown out; some large marble tiles had been dislodged from the walls; one entire elevator bank was destroyed by the fireball.”
9/11 Commission Report, side 290