A standard Boeing 767 cannot fly at a velocity of 950 km/h close to sea level without being torn apart.0

All available evidence points to Flight 175 hitting the World Trade Center 2. Some of the evidence is listed here: The black boxes from the plane could not be salvaged, but other sources point to the velocity of the plane. The most substantial source is radar data, which shows that the plane’s air velocity was almost 950 km/t briefly before impact with the World Trade Center 25. Videos of the disaster can be used to calculate air velocity, which NIST and MIT have done independently of each other. These calculations point to a somewhat lower velocity between 810 and 873 km/h9. Both radar and video – perhaps especially the latter – are not precise, but there is little doubt that the plane’s air velocity briefly was faster than it was designed to fly at that altitude. However, a plane exceeding its recommended maximum velocity does not say anything about how the plane will react to such speeds. There is a much higher risk that the plane will begin to disintegrate, but nobody can say how quickly that will happen or how. However, it does not mean that a plane will disintegrate the moment the recommended maximum velocity is exceeded10. We do know that airplane manufacturers build planes to withstand substantially more than the recommended limits in order to secure a wide margin for extreme conditions11. For modern passenger planes, the speed of sound (Mach 1) is generally a physical limitation. It is by and large impossible for an ordinary passenger plane, e.g. a Boeing 767-222, to reach that speed, since the plane would experience too much turbulence. This is due to the design of the plane, e.g., the wings in relation with the hull, and what aerodynamic charactertistics that follow. According to radar data, Flight 175 flew around Mach 0.78 at the time of impact and even reached Mach 0.82 when it went into a steep dive from 14,000 feet to 2,000 feet in the minutes before it hit the World Trade Center 25. 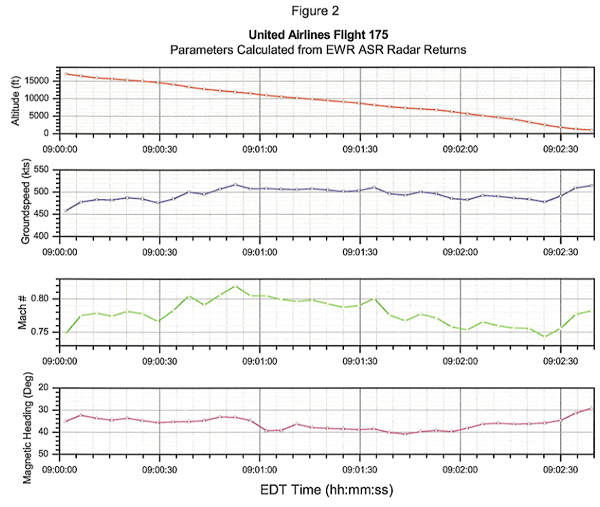 At no time was the plane near the speed of sound and the highly problematic turbulence. But there is no doubt that the plane was being pushed very hard and that it was quite a challenge to steer. It would have taken a dare-devil or an unscrupulous person to fly in that fashing. A description that fits a suicide pilot perfectly. It is obviously more difficult to hit a target with a plane the faster you fly, but the Twin Towers were easy targets, especially in beautiful weather as was the case on September 1112. The Twin Towers were also wider than the landing strips are in most airports. Finally, the plane was already on course for quite a while before impact and was only required to fly straight ahead. Here is a video of Flight 175 shortly before impact:
The fact that the plane went into a steep dive before impact enabled the plane to reach that dramatic high velocity. An analogy would be that you can bike much faster downhill. Thus, gravity and centrifugal forces are significant during flight. Actually, a pilot should indeed avoid diving too steeply to avoid too high velocity and strain on the plane.

Examples of Boeing 757 and 767 planes flying very fast close to the ground without disintegrating:

The harsh truth is that the plane could actually fly as fast as it did. It may be unknown to most people, perhaps even Boeing’s own test pilots, that a passenger plane could be pressed as far as was the case, but video and data proves that it could be done at least in this case.

Claiming that it had to be a modified plane that hit the World Trade Center 2 contradicts all videos of the disaster, since those show that, regardless of type, the physical design is the same, especially regarding wing proportions and placement on the hull. This means that Flight 175 would not be significantly different to maneuver than a modified plane resembling Flight 175 to such a degree that one could not tell the difference from photos.

On the other hand, it means that, had a conspiracy planned the attack using something that looks that much like Flight 175 as the images show, it would be incredibly stupid to increase the speed to 900-950 km/h, since it would become uncertain if the plane would be able to reach its intended target.

The claim is in conflict with another claim, namely that the World Trade Center 1 and 2 were built to withstand modern passenger planes. The latter claim presupposes that the planes that hit the Twin Towers were ordinary unmodified Boeing 767’s.