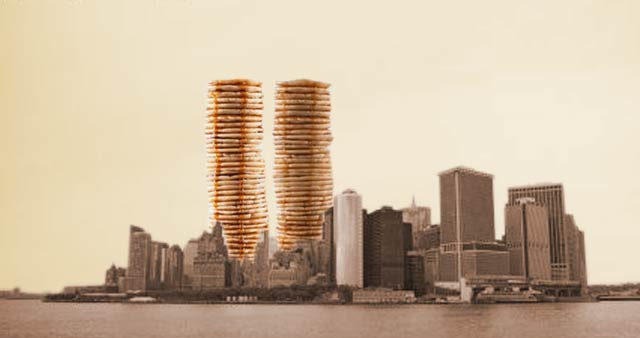 There were 400 meters between dispersed building debris around Ground Zero, and only a few floors were lying as pancakes0

The scope of the terror attack resulted in FEMA being charged with conducting investigations of the events on September 11, 2001. FEMA published the findings in a report in May, 20021. FEMA’s premilinary explanation of the collapses was that the fires probably caused the floor beams to fail, which could have caused the floors to fall like a stack of pancakes, thereby crushing the buildings. The claim insinuates that, since FEMA’s explanation does not reflect the real conditions, something suspicious must be going on.

FEMA was charged with the task of collating data and, based on these, to come up with recommendations and observations as to what happened to the buildings that were fully or partly destroyed:

This report presents observations, findings, and recommendations regarding the performance of buildings affected by the September 11 attacks on the WTC towers in New York City. This report also describes the structural and fire protection features of the affected buildings and their performance in response to the terrorist attacks. Due to the unprecedented nature, magnitude, and visibility of the terrorist attacks, this event is among the most well-documented in the media, particularly in terms of photographic images, lives affected, and the immediate responses and ensuing sequence of events. An understanding of these events must include the performance of the buildings under extreme conditions beyond building code requirements. This includes determining the probable causes of collapse and identifying lessons to be learned. Recommendations are presented for more detailed engineering studies, to complete the assessments and to reproduce improved guidance for building design and performance evaluation tools.2

In their far more thorough investigations, NIST concluded the following: General The two aircraft hit the towers at high speed and did considerable damage to principal components (core columns, floors, and perimeter columns) that were directly impacted by the aircraft or associated debris. However, the towers withstood the impacts and would have remained standing, were it not for the dislodged insulation (fireproofing) and the subsequent multi-floor fires. The robustness of the perimeter frame-tube system and the large size of the buildings helped the towers withstand the impact. The structural system redistributed loads from places of aircraft impact avoiding larger scale damage upon impact. The hat truss, a feature atop each tower which was intended to support a television antenna, prevented earlier collapse of the building core. In each tower, a different combination of impact damage and heat-weakened structural components contributed to the abrupt structural collapse3. The North Tower (World Trade Center 1)

400 meter The result of the official investigations explains why building debris was spread wide at Ground Zero. When two buildings, each more than 400 meters tall, collapse, a lot of debris will invariably be spread over the area. Even large parts of the buildings were pressed out and away from the footprints of the buildings. In reality, the area of debris was far larger, since dust, smaller parts, and inventory were spread over most of Lower Manhattan.

The claim is deliberately misleading, because the conspiracy theorists choose to interpret FEMA’s work, which was of preliminary nature, and at the same time ignore NIST’s subsequent and more comprehensive investigations. The claim contradicts a long list of claims, some of which are found on the same flyer (see “Related articles” below). One example is the claim that huge quantities of explosives and top secret military-developed nanothermite were placed in the World Trade Center 1, 2, and 7 prior to September 11, 2001. This, supposedly, caused the buildings to collapse in their own footprints. However, it cannot be claimed that the buildings did that and at the same time be claimed that debris was spread over an area of 400 meters in diameter.