These parts of the building is claimed to have been demolished or disintegrated by so-called Directed Energy Weapons, a kind of laser beam1 fired from a secret place in order to make the buildings collapse.

“Symmetry” is a clearly defined concept:

the quality of something that has two sides or halves that are the same or very close in size, shape, and position: the quality of having symmetrical parts2

It is puzzling, why it is claimed that the dust clouds from the buildings collapse should be particularly “symmetrical”: 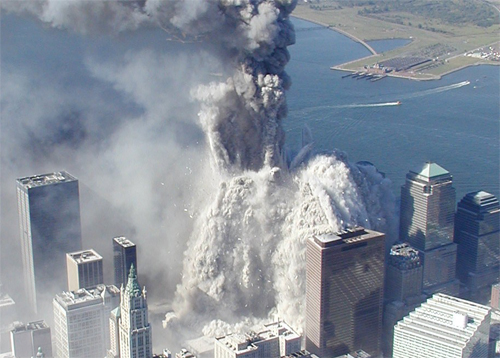 World Trade Center 7
It is possible that, for a moment, parts of the collapses can be interpreted as “symmetrical”, when a few photographs or video frames are examined but that would apply generally to all chaotic events. In the same way, it is possible to “interpret” that the devil should have shown himself both in the flames when the World Trade Center 2 was hit by the hijacked Flight 175 and later in the smoke from the blazing fires in the same building: World Trade Center 1’s “spire” The last parts of the building are not “pulverized” but collapse progressively as they are no longer supported by underlying structures. The following dust clouds will naturally occur, given that everything had been wrapped in dense clouds from the collapsing building. Death ray weapons By now, the concept of death ray weapons is quite old. Science fiction writers have always dreamt of and imagined this type of weapon. The most popular examples are probably Professor Calculus’s invention of a supersonic weapon, in the Tintin album “The Calculus Affair”, a weapon that in its final version can destroy whole cities from afar3, or the Death Star from the Star Wars movies, where whole planets can be destroyed with a very powerful laser beam4. There is no evidence of any kind that such a weapon exists.

The claim is characterized by ambiguous words that can be interpreted as needed. The problem arises when there is doubt about what “symmetry” means. Controlled demolitions are far from always “symmetrical”. Even the most controlled demolition will always have some uncontrollable factors. There is always the risk that the demolition, either in whole, or partly, does not progress as planned. It is likewise not possible to calculate exactly how each building part will behave during the demolition or while the building collapses. A controlled demolition always carries risks. If the World Trade Center 1, 2, and 7 had been prepared for controlled demolition by a conspiratorial organization, a symmetrical demolition would be in direct conflict with the goal, namely to make it look like a chaotic collapse. If the World Trade Center 1, 2, and 7 had been destroyed with laser weapons, the use of such weapons would immediately reveal the conspiracy. It would also be the first time in world history it happened, which is in direct conflict with another central claim by the Truth Movement, namely that it is impossible for something to happen for the first time. (KILDE !!!)