In their report of the World Trade Center 7, NIST left out the evidence of melted steel that FEMA’s report described0.

The claim stems from the preview of “Solving The Mysteries of WTC 7”, a movie produced in 2011 by one of the Truth Movement’s organizations Architects & Engineers for 9/11 Truth.

The claim strongly hints that, since the National Institute for Standards and Technology (NIST) did not include an appendix in the preliminary report about the disaster from the Federal Emergency Management Agency (FEMA), it must be due to NIST wanting to either hide or deliberately avoid investigating certain things that in reality is evidence that the World Trade Center 7 was destroyed by a controlled demolition on September 11, 2001.

The FEMA report is claimed to mention melted steel, which according to the Truth Movement is regarded as evidence that the so-called nanothermite was used to instantaneously melt supporting steel elements in the World Trade Center 7 as part of a controlled demolition.

FEMA’s appendix C deals with heavily rusted steel in two samples from the debris of the collapsed buildings at the World Trade Center.1 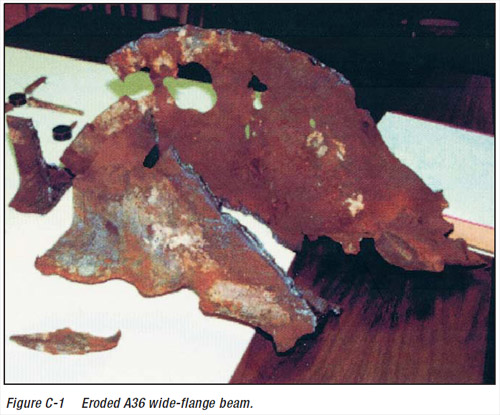 1
The conclusion of the FEMA report’s appendix C is as follows:

“The severe corrosion and subsequent erosion of Samples 1 and 2 are a very unusual event. No clear explanation for the source of the sulfur has been identified. The rate of corrosion is also unknown. It is possible that this is the result of long-term heating in the ground following the collapse of the buildings. It is also possible that the phenomenon started prior to collapse and accelerated the weakening of the steel structure. A detailed study into the mechanisms of this phenomenon is needed to determine what risk, if any, is presented to existing steel structures exposed to severe and long-burning fires.“ 1

FEMA is talking about steel that is either rusted or corroded remarkably quickly. FEMA calls the phenomenon “very unusual” and cannot determine the cause precisely. Instead, two possibilities are mentioned: That the phenomenon occurred during the fires in the buildings or that it occurred later in the chaotic piles of collapsed building parts.

There is no unambiguous explanation to why NIST does not follow up on FEMA’s conclusion that further investigation is needed to explain the occurrence of rust/corrosion. But there is no doubt that FEMA points to the fires in the World Trade Center, either while they were happening or in the aftermath, as the cause of the phenomenon and not anything else.

It is thus not to avoid mentioning anything that could lead to a controlled demolition or nanothermite that NIST does not investigate the phenomenon further.

NIST’s task is to determine standards for e.g. building construction, so that one can build more fireproof buildings. A logical reason that NIST does not investigate further lies in the “…if any…” at the end of FEMA’s statement:

A detailed study into the mechanisms of this phenomenon is needed to determine what risk, if any, is presented to existing steel structures exposed to severe and long-burning fires.

It is a very open statement and thus not clear if there is any significant risk at all, especially when taking into account that the circumstances surrounding the events on September 11, 2001, were unique and extreme.

It is self-contradicting that a conspiracy should publish two reports where one (FEMA) reveals the conspiracy and the other (NIST) tries to cover up the “unintended exposure” by leaving the phenomenon out instead of trying to explain away the phenomenon. It would mean that the conspiracy in question would be clumsy enough to make a fool of itself not once but twice in a row, but at the same time be sophisticated enough to place many tons of conventional and exotic explosives as well as triggering mechanisms without a single witness noticing anything.

The claim is false also because FEMA’s description of rusted and corroded steel is transformed into “melted steel” that, even if present, would not be a certain sign of either conventional explosives or thermitic materials.

Additionally, the claim is manipulative since it is based on a deliberate misquote. It is only possible to get to the truth of the matter by having read both NIST’s and FEMA’s reports. But then, one would also know that FEMA does not consider the finding of rust/corrosion to be melted metal and does not point to any other causes than fire.

As a matter of form, it should be noted that those making the claim either knows that it is based on a misquote (because they have read both reports) or that they don’t know (because they have not read the reports). Both are disingenuous.