Collapse at near-freefall speed, symmetrical, right down through the building’s resistance0.

It is unclear if the claim is about the World Trade Center 1, 2 or 7 but in this article, it will be treated as if it covers all three buildings. The claim suggests that freefall speed and symmetry should be signs of controlled demolition, as well as the buildings should have been able to withstand the collapse of some floors due to fire. Since each building collapsed completely, it must mean that they were all destroyed by controlled demolition.

The collapses start clearly asymmetrical, by floors on the side where the planes hit breaking down, whereafter the rest of the floors also break down. The top is pulled down exclusively by gravity which is why the top falls down through the building itself.

None of the collapses happen in freefall, which is most clearly observed by elements from the building’s facade, breaking off during the collapse, falling quicker (in freefall) than the collapse itself which lasts considerably longer. A detailed explanation of the progress of the collapses can be found in NIST’s reports1.

The part of the buildings that are below the impacts of the planes does not have a combined own resistance that can withstand a collapse from above. It does not take more than the collapse of one floor, before there is enough energy and mass above to break through all the floors below. Even if the floors themselves were only a few meters high, the energy released is enormous when the many tons from the upper part of the buildings fall just a few meters. The floors were not designed to be able to withstand such force2.

World Trade Center 7
The building is 186 meters tall and takes at least 13.5 seconds to collapse, which combined is way from freefall. During the collapse, a part of the building collapse in freefall for 2.25 seconds, which – for that part – is equivalent to 32 meters. Gravity does pull the building straight down (what else should gravity do?) but towards the end of the visible collapse, it can be observed that the building topples and falls apart.

The collapse was not in freefall, it was not symmetrical, and the building debris spread over the nearby streets5. 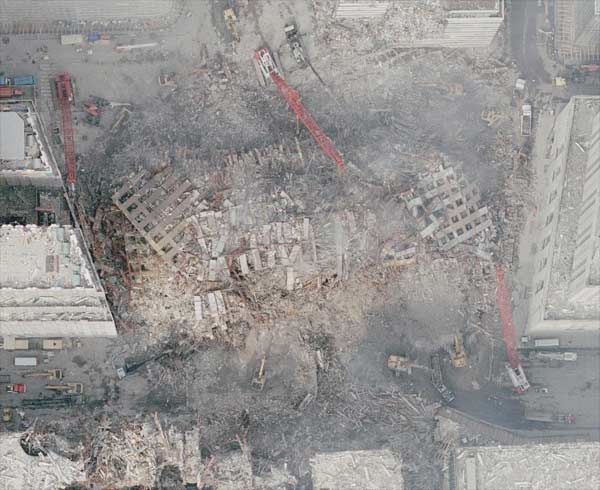 It is clear that the collapse is initiated by the fires on the 12th and 13th floors causing column 79 to buckle which starts a progressive collapse of the whole building where the penthouse is merely one of the first visible signs from the outside of the north side. Everything is in accordance with NIST’s investigation of the collapse1.

The penthouse itself does not fall symmetrical: The eastern part falls first, and it does not happen at freefall speed.

There are none of the most obvious signs of controlled demolition of the World Trade Center 7: No rhythmical explosion booms and no explosion flashes of light. Both are very obvious at controlled demolitions. NIST did in fact investigate the possibility of explosives but concluded that it would have been quite implausible. One reason given is that each explosion boom would be between 130 dB and 140 dB which must have been audible on lower Manhatten7.

130 dB is so loud that the pain threshold for most people is reached. We are thus not talking about booms that cannot be ignored but booms so loud they that would cause most people to feel pain and far exceed the risk of hearing damage9. None of these devastating booms are recorded by a single video camera for miles around, or by witnesses in the area.

The claim is manipulative and misleading because it tries to draw a conclusion based on false premises that freefall speed and symmetry are evidence of controlled demolitions and that there should be resistance enough in the buildings’ nether parts to resist the collapsing upper parts.

The word “near” is so open to interpretation that it can mean anything. It is used to explain away the uncomfortable fact that none of the three buildings collapse in freefall. “Near” indicate that the collapse speed is so close to freefall speed that there must be another explanation than the official one. The claim thus points only to one other explanation, namely that the buildings must have been destroyed by controlled demolition.

Apart from the fact that the premises are false, the claim is also self-contradicting, if it is intended to cover all three building collapses. The three buildings all collapsed differently.

The World Trade Center 7 was not hit by a plane but was damaged by fires spread over most of the building. After seven hours, the building started to collapse far more progressively, from the inside out, starting on the east side: