The videos where it is claimed that Osama bin Laden admits to the attack are clearly faked.0

After the terror attack on September 11, 2001, al Qaeda published a number of proclamations either in written form, as audio recordings, or videos where Osama bin Laden in particular explained, among other things, the reasons for al Qaeda’s planning and execution of the terror attack.

The Truth Movement claims that those proclamations where Osama bin Laden admits responsibility on behalf of his organization are faked. A video that appeared in December 2001 is pointed out as perhaps the most obvious evidence of a hoax.

The Truth Movement offers several reasons for this:

Dr. Abdel El M. Husseini: “I have examined the Pentagon’s translation thoroughly. This translation is very problematic. At the most important parts, which should prove that bin Laden was the culprit, it is not identical with the Arabic tone.”1

It is not clear if Husseini means “the Arabic language tone” or “what is said on the tape in Arabic”. It is presumably the latter.

In the tv show, it is mentioned that there are many examples of wrong translations, but only three are mentioned:

According to the Pentagon translation, bin Laden says, “We have calculated the number of dead on the side of the enemy beforehand.”

Dr. Murad Alami: “It doesn’t say ‘beforehand’ (anywhere in the text, ed.). It is wrong. When you look at the original version in Arabic, and there is no misunderstanding, you cannot really understand it (that way).”1

According to the Pentagon translation, bin Laden says, “We had received a message the previous Thursday that the event would happen on this day.”

Dr. Murad Alami: “Previous is not found in the text. The following sentence that this event would take place on that day, or this day, cannot be heard from this Arabic original version.”1

According to the Pentagon translation, bin Laden says, “We encouraged each of them to go to America.”

Dr. Murad Alami: “This translation of ‘we’ is wrong. The Arabic original version that I have heard says ‘It was demanded of them”. What comes after that is incomprehensible.”1

In German, we find the verb fordern, to demand, as well as the composite verb auffordern, to encourage.

Professor Rotter had this to say:

Professor Gernot Rotter: “Independently of whether Bin Laden himself was involved, organizational actively in the assassinations or not, this tape is of such poor quality that it is impossible to understand at times. And what can be understood is often taken out of context, so that it cannot be used to construct any evidence. The American translators, who have listened to the tapes and transcribed them, have apparently in many cases added things that they wanted to hear but cannot be heard, not even after having listened to it several times.”1

It is also claimed that the person seen in the video is not even Osama bin Laden:

Finally, there is not a lot that points to it being bin Laden in the video in question. Or perhaps he was so vain that he had his nose and cheekbones fixed? He had plenty of money.2 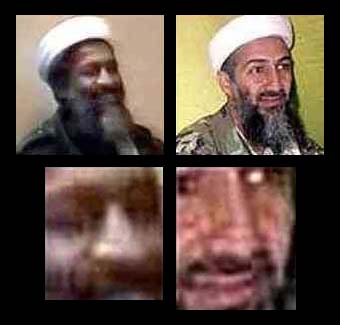 Which of these persons is not Osama Bin Laden ?

ANSWER:
If you have chosen like most people, you have chosen “E” and agree with most people that this person is not the real Osama Bin Laden! “E”-Osama also appears in the so-called “confession video” that was found by a minor miracle in Afghanistan and is the crown evidence that Osama bin Laden was behind the attack on September 11.3

The translation already takes into account that some passages are incomprehensible or that there is a reason to doubt the content. It can thus not necessarily be concluded that the translation is deliberately twisted or wrong. It can easily be a question of different interpretations.

The critique of the translation is focused on single words that have no definite consequences for the entire message. The critics have obviously not had anything to object to, when it comes to these interpretations that clearly show that Osama bin Laden takes responsibility for the terror attack (04:26 – 06:00):

OBL: The brothers who executed… All they knew was that there was a martyrdom operation. They were asked to go to the United States… Europe… but they did not know one single little thing about the nature of the operation.

[male voices in the background]

OBL: They were just getting trained… They were not told about things there, until a short period of time before they boarded [the airplanes]…

OBL: [UI] in the airplane, and they are going very fast and it is hitting the building – and the operation is going on… [laughing]… They broke the good news. We said, God bless you…” [UBL and males laughing]

The critique of the translation must be considered small potato, where it is more a question of interpretation than deliberate twisting.

Watching the whole video, it is obvious that the person is Osama bin Laden. Here are some unaltered frames, so distortions are avoided:

A single frame is chosen, in poor quality, but the many frames, where it is clear that it is Osama bin Laden, are ignored.

There can be several explanations as to why the conclusion is reached based on a single frame. Either the claimant has not watched the video in full and sought to find the clearest frames, or the claimant has merely uncritically accepted the claim, or the frame has deliberately been chosen for its poor quality in order to sow doubt about the identity of the person.

Whether Osama bin Laden was behind the terror attack on September 11, 2001, does not depend on him having confessed on any video or audio tape.

A person suspected of a crime does not walk, merely by denying his guilt. Likewise, a person is not guilty merely because he confesses.

One could be facetious and point to the missing confession from George W. Bush that he, together with others, should have been the real guilty persons behind the terror attack on September 11, 2001. If the claim that Osama bin Laden is not behind the attack, because he himself denies it, is to be taken seriously, it also means that George W. Bush is not guilty either (something often hinted at by the Truth Movement) since he has not even said anything about his own guilt. Ultimately, it means that since nobody has taken the blame, the terror attack has not even happened.

The claim of a missing confession is also found among Holocaust deniers who point to a missing order from Adolf Hitler about the systematic extermination of the Jews during the Second World War. It is argued that, if such an order cannot be found, the Jews were not exterminated by the Nazis.4

Despite the divergent interpretations the whole translation clearly shows that Osama bin Laden has taken responsibility for the terror attack on September 11, 2001.

Watching the whole video, instead of a single carefully chosen distorted frame, it is obvious that the person is Osama bin Laden.