In July 2013 the umbrella organization ReThink911.org0 which comprises a number of groups within the Truth Movement a video asking for financial support for an information campaign.

The goal is to get the public to realize that the official explanation of the terror attack, according to the Truth Movement, is false and that the real guilty people can be found among the U.S Government, the Bush family, the financial and political elite, the media, the freemasons, the Illuminati, the Roman Catholic Church, the Rosencreutzers, the British Royal Family, Hitler, the Jews, the reptilian aliens, and, perhaps less surprising, all critics of the Truth Movement. This group is referred to as “the New World Order”1.

The campaign ran until August 1 2013 and was planned to appear in the following cities0:

The video begins with what Danish journalist and author Ole Retsbo in his book, “Conspiracy?” calls “the Holy Grail of conspiracy theories”, namely Building 7. The building was hit by huge chunks of debris from the World Trade Center 1 when this building collapsed at 10:28. Building 7 burned for seven hours and was during that time declared lost and thus was allowed to burn until it collapsed on its own, at 17:20.2 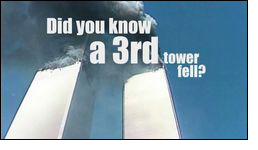 The question is asked, “Did you know a 3rd building fell on 9/11?” and show the World Trade Center 1 and 2, also known as the Twin Towers.

The aim is to draw attention to Building 7 which the Truth Movement seeks to portray as an almost “secret” collapse that the media does not dare cover. This means that the public is not aware of the existence of Building 7.

The strategy seems to be that once people hear about Building 7, they will automatically ask questions and start the avalanche. 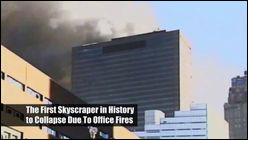 The clip serves as evidence that the building’s collapse really was a controlled demolition.

The video clip is edited so only the last half of the collapse is seen, namely the outer shell that remains after the internal structure of the building is collapsed.

In reality, the collapse lasts at least 13,5 seconds and not, as claimed by the Truth Movement, 6,5 seconds. The collapse does not happen in “near” free fall2.

Additionally, the audio track has deliberately been removed so the viewer cannot hear that there are no rhythmic explosions, something that characterizes real controlled demolitions3.

NIST’s final report on Building 7’s collapse is referred to. The cause of the collapse is given as “normal office fires”.

The viewer is left with the impression that Building 7 collapsed “mysteriously” and “inexplicably”.

The description is wildly oversimplified and ignores the full explanation: Building 7 collapsed after having burned for 7 hours, where the many fires inside the building were not fought. The reason for this was that the firefighters had left the evacuated building on its own because they had their hands more than full dealing with the chaotic situation at the newly collapsed Twin Towers.4 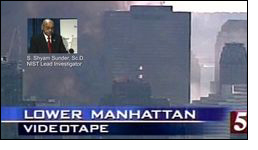 Quote by Shyam Sunder, who was in charge of the investigations of the destructions at Ground Zero.

In the background can be seen a video clip of the collapse of Building 7 from a different angle.

The quote is, as was the case with the reference to NIST’s final report, edited so it appears as if the explanation of Building 7’s collapse is extremely simple.5

The video clip that accompanies the quote is edited as the previous clip was so that only the last half of the collapse is seen. The audio track has also been left out so that the lack of rhythmic explosions cannot be heard either.3

The speaker says, “In 2008, the government admitted that World Trade Center 7 collapsed at free fall for over 100 feet.”

The claim is misleading on several counts: It was not the government who “admitted” anything but NIST who in their report had pointed out themselves that a part of the northern façade was in free fall for 2.25 seconds.6 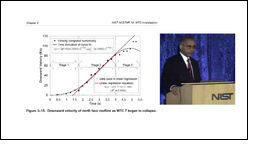 The speaker continues: “This admission brings with it some serious implications that have yet to be addressed.”

The graph is taken from NIST’s final report about Building 7’s collapse and shows how the roof of the northern façade falls.

It was not an “admission”.

It is left out what the “serious implications” are.

Had it been free fall, it would not fall slower after 2.25 seconds.6

Speaker: “Polls show that 30% of U.S. citizens still have questions about the official 9/11 hypothesis.”

A photo of the cover of the 9/11 Commission Report is shown.

There will always be a part of the population who will doubt any official account of catastrophes or assassinations.

Having questions about an account does not mean that one is doubting that the account is true. There will always be unanswered questions without it meaning that the official account is false.

It is clarified that the organization seeks support from professional groups as well as non-professional groups. The claim that the goal is to have an independent investigation is undermined by the inclusion of groups with a religious or political agenda. 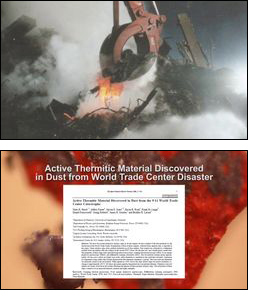 Speaker: “A comprehensive investigation is needed to address irrefutable scientific facts and evidence which simply cannot be ignored.”

Two photographs are shown: From an excavator picking up glowing metal from the debris from Ground Zero, and of “iron-rich spheres” and the front page of the so-called nano report.

The photograph of the microscopic “iron-rich spheres” is claimed to be evidence that top secret military-developed nano-thermite was used to get the World Trade Center 1, 2, and 7 to collapse. The spheres can easily be produced without the use of nano-thermite.8

Photoshopped examples of what the campaign ads will look like. 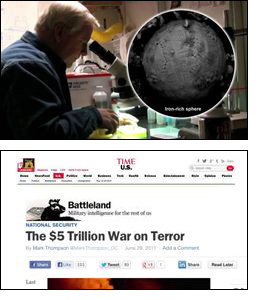 Speaker: “ReThink911 is ready to facilitate renewed and growing interest in this highly relevant issue, by drawing attention to that lesser-known third tower.”

The person looking through the microscope is Steven Jones, one of the authors of the nano report.

Here, the political motivation for “rethinking” 9/11 is revealed: A line from the terror attack to the subsequent wars is drawn, with the intention of arousing suspicion that those who profited from the wars were also those who were behind the terror attack.9 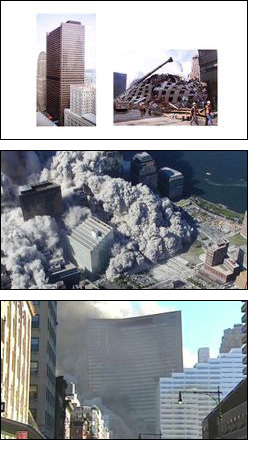 Speaker: “A 47-story skyscraper which was not hit by an airplane but collapsed completely, from top to bottom, on 9/11.”

The photograph of the collapsed Building 7 should indicate that there was only a smaller heap of debris after the collapse.10

The photograph of the immense dust clouds has been chosen so the many heavy pieces of debris from the collapse of the World Trade Center 1 are not seen hitting Building 7.4

The video clip is, like the other two, edited so that only the last part of the collapse is shown. Again, the audio has been removed.4 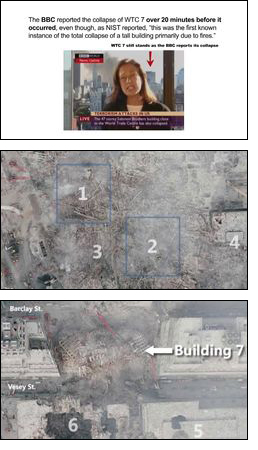 Speaker: “World Trade Center Building 7 has been a starting point for many and will be the initial focal point of ReThink911’s campaign to be followed by additional significant facts and points of evidence regarding the total destruction of all three World Trade Center skyscrapers on 9/11.”

The video clip from the BBC shows a reporter who speaks of Building 7’s collapse, at around 17:00. The building can be seen in the background.

Two images of the footprints of the World Trade Center 1, 2, and 7.

Throughout the day, confusing news bulletins had been pouring in, one of those the collapse of Building 7.11 The reporter says that the building is collapsed, while the information from Ground Zero told of an impending collapse.12 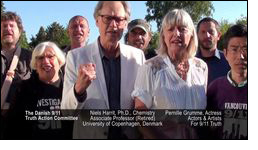 Video clip of the Danish 9/11 Truth Action Committee, where among others, Pernille Grumme and Niels Harrit express their support for the campaign.

Pernille Grumme: “We strongly support the ReThink911 initiative because we are opposed to crime.”

Niels Harrit: “And because we believe that our civilization is doomed unless we confront the unanswered questions of 9/11.”

The Truth Action Committee is formed specifically for the campaign. It was not at the time of publication of the video possible to learn who were members.

Examples of the campaign’s product is shown. Finally, a call to support the campaign with money.

The video ends with the parole “Be the media. Be the change”, without voice-over.
The parole can be seen as if ReThink911 intends to take control of the media, in order to enlighten people all over the world about the campaign’s message. 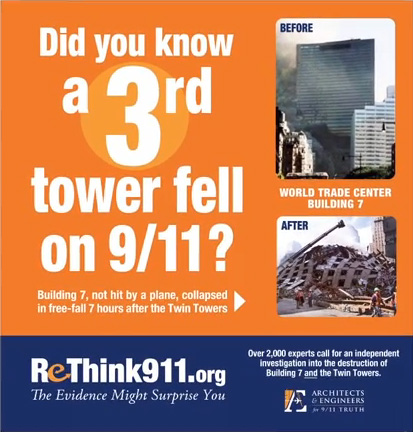 The reason for “rethinking” 9/11 goes as follows:

“Building 7, not hit by a plane, collapsed in free-fall 7 hours after the Twin Towers”

It is not correct that the building collapsed in free-fall. It was only part of the northern façade that fell in free-fall, and only for 2.25 seconds.6

ReThink911.org consists of the following groups:

The Danish Truth Movement, i11time.dk13, is not represented. In return, one of the leaders of the Truth Movement, Niels Harrit, appears in the video with a group calling itself “The Danish 9/11 Truth Action Committee”.

This could indicate that the Truth Movement internationally is cutting ties to i11time.dk, and instead will focus on Niels Harrit’s own group.

The video is a fundraiser for a campaign intended to awaken the people of the world to become interested (again) in the terror attack on September 11 2001, because the organization believes that there are numerous unanswered questions concerning the catastrophe.14

The Truth Movement has for years tried a number of initiatives intended to awaken the peoples of the world, so that the movement could get its core demand fulfilled, namely a so-called “independent investigation” of those aspects of the terror attack the movement does not find have been investigated yet.15

By founding “The Danish 9/11 Truth Action Committee” Niels Harrit has chosen to abandon his position as a scientist, in favor of the role as a political activist. He can thus no longer be considered an independent person.

Obviously, questions can be asked without the lack of answers means that someone is trying to hide something. The Truth Movement in Denmark has collated a number of questions that have been published on flyers. All of these questions have been answered.15

The campaign is thus built on two lies:

To support the claims, a number of manipulated video clips are used, where those parts that disprove the claims have systematically been removed, as well as the audio, so it cannot be heard that there are no rhythmic explosions, which would signify real controlled demolitions.

It is also presented as if there have been no answers to the central questions from the Truth Movement, either because the movement does not want to, or is able to, accept the answers that undeniably exist.